« Ellen Degeneres opens Oscars with a bang! | Main | Howard K. Stern, will he crash and burn? »

Monday will kick off a battle in the Bahama's between friends and relatives of the late Playboy model, Anna Nicole Smith.  Smith, of course, leaves behind a 5-month old daughter named Dannielynn who could stand to inherit a billion dollars. 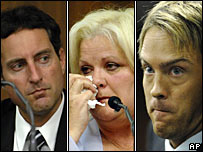 Fighting for custody are Smith's ex-boyfriend Larry Birkhead, estranged mother Virgie Arthur and the man who is listed on Dannielynn's birth certificate as her father - Howard K. Stern.

Larry Birkhead is the most likely father of the child, but he may struggle to get custody.  He first must get a judge in the Bahamas to order Dannielynn for a paternity test, then he will be required to obtain custody as well.

Virgie Arthur is the baby's closest to kin.  Her best chance at getting custody seems to be if none of the men who have come forward match DNA with the baby.  Meanwhile, she has already started a war against Howard K. Stern in hopes of taking Dannielynn back to Texas.

Being listed as Dannielynn's father on her birth certificate may give Howard K. Stern an edge on the pack.  If a judge refuses to require a paternity test, then Stern simply has to maintain custody.  His best chance at loosing is if the other two can prove that he was supplying Anna Nicole and Daniel Wayne Smith with the drugs that likely killed them.

The paternity hearing is expected to come to heads this week, as the court appointed attorney hopes to finalize arrangements to lay Smith to rest by Tuesday.

Can't get enough of the Anna Nicole Smith saga?  Take a look at the rest of coverage while you're here!

TrackBack URL for this entry:
http://gaysocialites.blog/magazine-mt/mt-tb.fcgi/300