Every Saturday!! Music by Steve Sidewalk, Hosted by Ronnie Hokanson. 18 to party, 21 to drink.

« Simpson's episode postponed after VA Tech massacre | Main | Quote of the Day: Sanjaya is getting a bodyguard! »

The new Hot Mess Sundays at Porky's is the talk of the town!

Everybody is talking about the opening week of Hot Mess at Porky's.  Even though there was a Nor Easter ripping through New York for the grand opening last Sunday night, the place was literally packed!

Here's what Next Magazine wrote in this week's edition:

Despite the rain on Sunday the new Hot Mess at Porky’s party lived up to its name. Not only did the Nor’ Easter make everyone wet and sloppy to begin with, but tons of booze turned the Jersey frat boys, Brooklyn hipsters, drag starlets and muscled I-Bankers out. Steve Sidewalk and Adam busted the beats in the frat boy dream bar as we downed supersoaker shots from studs Brandon, Clint and Junior before partaking in a hilarious yet drenching beer bong contest with hosts Mimi Imfurst and Epiphany (that we lost horribly—so much for our fraternity fantasies!). SEEN: Ronnie Hokanson, Drew Zailen, Chris Ryan, Jason Preston and Logan. 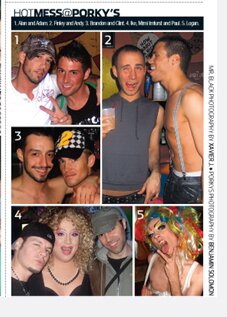 HX Magazine also had some pics up too!

This Sunday, DJ Adam and Steve Sidewalk are giving away tickets to see the Killers at Madison Square Garden.  The hostesses are Rainblo, Kitty Litter and Acid Betty.  There no cover, ever!  Porky's is located at 55 West 21st Street in NYC. 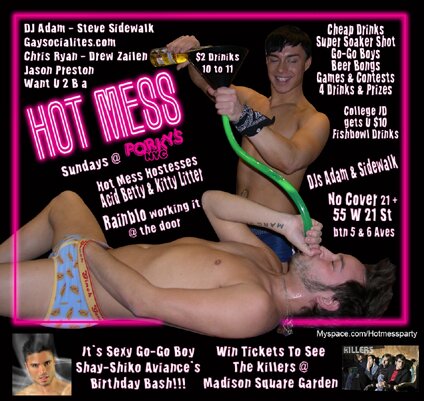 TrackBack URL for this entry:
http://gaysocialites.blog/magazine-mt/mt-tb.fcgi/864