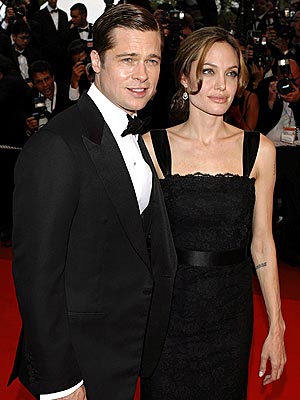 Wouldn't it be nice to take a whole year off work?  That's exactly what Angelina Jolie says she plans to do after wrapping up a busy year.

"I'm working this summer. I'm in Prague for a few months, then I take two months off, then I work for two months," Jolie told People magazine while promoting A Mighty Heart at the Cannes Film Festival. "And then I take a year off."

Jolie plans to take 2008 off work so she can spend time with her kids, Shiloh, Maddox and Zahara.  I bet she and boyfriend Brad Pitt will pick up at least one or two more kids while Angie isn't working.

Jolie, a Goodwill Ambassador, says she will continue her campaign for justice around the world, even though there have been concerns for her safety: "I don't want to live inside a box. I will be smart, but I will lead a very bold life, and I will learn about the world."

The Jolie-Pitts are American royalty!

Good for Brad & Angie! I bet they're planning on having another biological baby. Say what you want about these two, but they said they wanted a lot of kids and that's exactly what they're doing. Some people may think it's too many too soon, but I grew up in a large family with all biological siblings all born close together. If my mother could have 8 kids and work full-time with a crappy father in the picture, then Angie and Brad can handle 10 or 12 kids without a problem. I just wouldn't want to pay for all the traveling for that many kids!

TrackBack URL for this entry:
http://gaysocialites.blog/magazine-mt/mt-tb.fcgi/1156