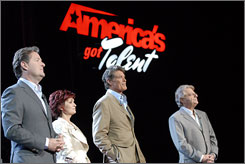 The second season of America's Got Talent kicks off on Tuesday night on NBC with several new cast members and a whole lot of drama.

America's Got Talent replaced Regis Philbin with Jerry Springer and Brandy with Sharon Osbourne.  USA Today says we can expect fireworks between the two British judges, veteran Piers Morgan and newcomer Sharon Osbourne.  Evidently Piers is a bit more harsh than Sharon would like when it comes to critiquing the contestants on the variety show.

"I sense a lot of pushy parents who think there's an easy million to be made if they can get their kids past the mean judges," he says. "But there's no point in having judges if people at home are going to be saying, 'That wasn't worth $10, let alone $1 million.' Sharon and I have had some pretty spectacular rows."

Osbourne counters: "There's a way of letting people down gently and not bursting their bubble. Piers thinks it's fine to stab someone, then ask for the knife back."

America's Got Talent kicks off on Tuesday night at 9pm ET/PT.

TrackBack URL for this entry:
http://gaysocialites.blog/magazine-mt/mt-tb.fcgi/1270