« Will a gay man co-host the View? | Main | Isaiah Washington says they should have fired the gay guy » 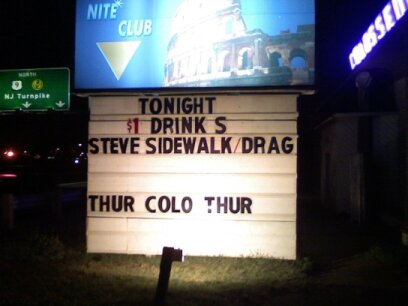 Rumors have been flying rampant this gay pride week in New York City that one of the big apple's most well-known pop DJ's, Steve Sidewalk, made an appearance at a New Jersey night club in drag.

gaysocialites.blog can confirm that the club Coliseum advertised that Sidewalk would infact perform as a female under the name Donna Dollar-Drinks on Tuesday night.

Insiders say Sidewalk performed the song "Stupid Girls" by P!nk, and an encore of "Girlfriend" by Avril Lavigne.

The big question is:  can we expect to see more drag from Donna Dollar-Drinks Sidewalk?  I guess only time will tell.

People do the craziest things during gay pride!

Actually my name drag name is Wanda DuMi. Donna Dolla-Drinks is some nasty jersey only washed up queen.

There is a big October Tour in the works for Miss DuMi. I heard that Charlene, Orange Crush, Cherry Poppins and Eda Bush will be joining her.

Steve Sidewalk is one hot bitch when he's wearing sequins.

okay, really...no one is going to make the obvious boy george joke. I can't tell if this is glamorous or a cry for help! Love you Steve!

Steve Sidewalk is a hot ass superstar dj. My friend and I wanna effiel tower him.

TrackBack URL for this entry:
http://gaysocialites.blog/magazine-mt/mt-tb.fcgi/1445