HX awards won't be a drag this year! 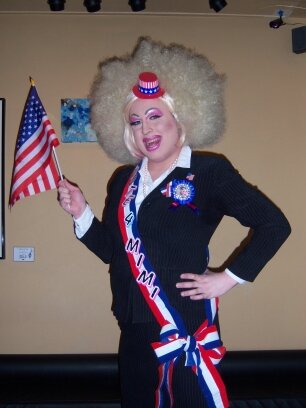 Imagine if actors hit the streets and campaigned for an Academy Award.  It might be frowned upon by their peers, but when you're a crazy drag queen you can get away with just about anything!

Mimi Imfurst is putting her own freakishly unusual twist on this year's HX awards.  As a nominee for Drag Queen of the Year, Mimi is pounding the pavement as if she plans to be the first female president.

Ms. Imfurst is doing a complete tour of New York's hot spots draped in red, white and blue asking you the voters for your support.  As silly as it may seem, the Vote Mimi campaign is serious business with posters, flyers and statements to the press:

"In an age where the state of human kindness is as endangered as a chance that New Kids on the Block will do a reunion tour, it is important that someone stand to remind gay people everywhere to be outrageous and do not fall to the pressures any stereotypes put upon us by meterosexual straight men who force us into a conformed Abercrombie ad.  I'm here to root for the human soul to laugh and live and say FUCK YOU to our oppressors.  Oh and praise Jesus and world peace," Mimi said in a statement released to gaysocialites.blog.

Mimi addressed the crowd at Porky's for Hot Mess on Sunday promising blow jobs and bathroom drugs for everyone if she wins.

Voting in the HX Awards runs until Monday, June 11th.  While you're there voting for Hot Mess as the Best Gay Lounge Night, we hope you'll vote for Mimi too. Her campaign slogan says it all: "Cause sometimes the retarded fat girl deserves to win."

That's classic...shez got my vote!

I second that notion

TrackBack URL for this entry:
http://gaysocialites.blog/magazine-mt/mt-tb.fcgi/1263