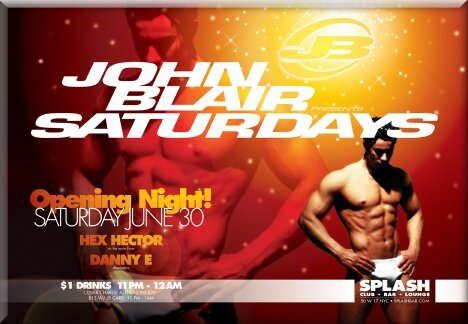 It's official, but you already know this nightclub scoop because you heard it here first either on gaysocialites.blog or by way of HX magazine.  John Blair is closing his Saturday party at Avalon to move to Splash.

Blair made the announcement on his website featuring a flyer announcing that the Avalon party will end during gay pride on June 23rd.

Another flyer also announces his move to Splash, and a grand opening that will feature DJ Hex Hector on June 30th.

As Blair told gaysocialites.blog exclusively, this move is a safe bet in a dying New York night life scene.

"Nightlife in New York is going through a BIG change.  The city is making it very hard for large clubs to stay in business," Blair says.

"We feel Splash is right in the middle... not a big club but not a small one either," John added.

I can't help but notice that none of the Avalon hosts (i.e Brian Brady, Chris Ryan, Amanda Lapore, Logan, Cazwell, etc) are mentioned on the new Splash flyer.  We can exclusively report that both Chris Ryan and Logan have joined the staff at the Notorious Saturday party at Rush, just down the street from Avalon - effective immediately.

I guess this means Blair will not only face competition from his former DJ Peter Rauhofer over at Stereo, but he'll also likely have to face Formika and Alan where ever they land.

This could be the revival that New York's nightlife needs.  A little competition never hurt anyone!

Splash...hahahaha..thats's exactly where he belongs!
Avalon kicked his tired ass out! Thats the only reason why he is moving his lame party!

Yo Faggot!!! maybe you didnt get the Memo yet,I guess you were suckin cock at the time but the Memo that came in was.......

"Very interesting. My friend Billy told me to go and read the "comments" about Avalon. I appreciate Billy posting that email but the nasty things that two of those queens wrote is just so much bull.

You all wait until September and see what is up and open in the city. Peter and Offer are doing well at Stereo. The night they are not there the place is dead. Avalon never gets over 1000 people and the average age is 21 to 30. Avalon is way too big for 1000 people.

Avalon did not ask us to leave, as a matter they made us stay an extra month as was in our contract. They were very happy with us as were the police.......the fact that a gay night was there and not a hip hop party.

The opportunity at Splash had nothing to do with Avalon. It was something that had been in the works for 6 months. Our investment in Splash was because this will be one of the last places standing until we get a new mayor.

Those who say other wise either are stupid or have maybe did not get a gold card and are pissed. HA

Those are the facts with no bull shit".

Maybe instead of being a bitter faggot,you will read this and take it into consideration,or maybe you left your brain at fuck buddy's place.

That also goes for the other bitter queens who want to disrespect,maybe instead of bashing the last successful gay promoter in town,you should get the facts of whats really happening (Truth be told) part of the reason why the Gay club Scene is dead,is because you bitter queen bitches dont contribute and you bash on the most known promoter in the "so-called" gay nightlife scene.If it were not for John Blair's success with Roxy Saturdays the gay club scene would have been done years ago,not like you bitches are smart enough to understand that and accept it.Roxy was the last good place around until the city decided they wanted it dead,it was all original and was the only place left in town with good music and a good vibe.Without that place I have noticed how much of a JOKE the NY gay scene is,its not even a scene,its just a bunch of useless flaming bitches out there to BE seen but not become part of the scene.Thats why it is dead,not because of John Blair my dear,its because of the bitter bitchy superficial queens in this town,its queens like them that give gay New Yorkers a bad name.Nuff Said!!!

P.S. the only bitches that will come back with a negative response to my messages,is a real bitch and need to get their shit together because Im right and they know Im right they just cant accept it. Im jus the only person on here that has the balls to point it out.

Thanx for keeping us up-to-date Charles. I think you guys need to be less hostile to each other and more understanding of John's situation at the same time. He is trying to do what is best for our right to party! So lets go out and support the nightlife and have some fun.

No matter what happens in the gay club scene it's good to know there will always be people working to keep it alive, and it sucks there's not many. I give major props to people like John Blair, Chris Ryan, Formika, etc. for actually doing stuff that's fun and giving night life a heartbeat. It's people like this we should thank for giving us something to do at night in New York.

Well, it's nice to see SOME intelligence regarding this situation.

Come on .. if we believe being gay is a valid lifestyle, let's stop acting like so many of the STR8 assholes in this world who criticize us, demean us, and try to make us feel like shit.
Um, we don't need them. We do it better LOL.

Seriously -- as someone points out, it is JOHN BLAIR (not Peter or anyone else) who has contributed SO much to the GAY scene. Let's at least have the decency to give credit where credit is due.

I'll take on (in argument) any one of you who thinks otherwise - and I bet I'd win for one reason: FACTS, not bullshit.

Let's enjoy being gay and make it mean something. Stop the infighting (what are we, the middle east???) and start CONTRIBUTING to the well being of our community- Like John and Beto have for many years.

PS- I'm not a huge fan of Splash, but I am of good guys like John and Beto, and Dougie, and others.
I'm at least going to TRY to make it work. Join me. Join us. Join SOMETHING :P

Specifically to the poster "Served".

WHY do you feel the need to make up lies about this?
When someone twists or complete distorts the truth (as you have), there can be only one reason: BITTER.

Come on, how does it serve our gay community to make up lies?

If you go to Avalon and speak to ANY of the staff, you will see everyone is a bit sad. It was a good team, a good party. It's ECONOMICS and CITY POLITICS/BULLSHIT that is stopping a great space having a great party.

And of course, it's bitter gay guys like you that contribute to the demise, not the well being.

JB and his staff aren't afraid of competition. Why are you?

If you like a different party - great! That's good for all of us if there's good parties for us GAY people.

But this lying bullshit truly hurts us all.

Please. Give this some thought, Ms Served. Lies don't help us at all. This is a time we need to come together (and I don't mean just in bed!).

Its about the DEEJAY and NOT the promoter these days and its definitely NOT about John Blair.
Times have changed and John Blair hasn't.
It's not the city that makes John Blair's parties bad and less attended. It's only him and his crew of morons he's influenced by. There are still lots of other great successful parties out there (Alegria, Evolve, Fresh Fruit, Stereo...)

Rauhoffer proved to everyone how a great party is done WITHOUT any promoter and it just drives John Blair nuts. Thats why he had to lie to the whole world about Stereo being torned down in the summer. Just like he lied about Roxy being torned town. Guess what John....the party at Roxy will continue pretty soon WITHOUT you!!!!!!

John......will you ever stop telling lies??????? Stereo is also doing great when Peter or Offer Nissim are not spinning. Stereo got the hottest crowd.....a crowd you wish you would have and never had! - Not even in the best Roxy times. And you know why..because the party is about the MUSIC, THE PEOPLE and NOT YOU!

And again to John Blair...it was at Roxy and NOT Stereo when it only was packed with Deejays Peter Rauhoffer or Offer Nissim as Peter Rauhoffer himself had full control over these nights. All other nights were run down by YOU, John Blair.
Now you can go back spreading more lies. We are all waiting for the next lie you will tell us in 3 monhs WHY you are leaving Splash.....lol
SAD.

PS: You want me to post that email you sent some weeks ago to George Dellinger (Manny Lehman's manager) where you were telling him that you would never ever consider taking over an embarrassment like Splash????? hmmmmm...seems like you're running out of options lately? .....well at least your fat boyfriend has another place where he can hit on twinks and get free drinks all night!!

How true!!
John Blair is a selfish clown and finally he is experiencing the bitter truth about how "popular" he really is.
He just can't get over the fact that deejays are the real superstars these days and nobody cares about washed up promoters like him who are out of touch with the reality.
Theres a reason why all these great deejays refuse to ever spin again for John Blair and there's a reason why all other parties where these deejays spin are extremely successful:
Tony Moran
Abel
Manny Lehman
Junior Vasquez
Peter Rauhofer
Victor Calderone
Offer Nissim
...the list goes on

Rauhofer can suck my dick!!! Hes a bitter homo who bitches when he doesnt get his way,I got the proof from an article I read on a circuit party website back in april.Nuff said

That goes double for the lying back stabbing bitches who support him,I will never support rauhofer again,I would stick with Pacha,Id rather dance around str8 people than dance in a crowd of bitters who are obsessed with one DJ and tries their damnedest to make other DJs and Promoters look like jerks,when technically they are the jerks.

TrackBack URL for this entry:
http://gaysocialites.blog/magazine-mt/mt-tb.fcgi/1350