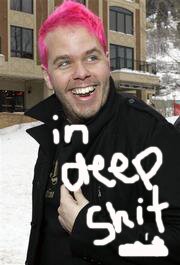 Perez Hilton is in some deep shit.  The photographers who are suing him for misuse of their photos are trying to cut him off at the source by going straight for the companies that host his site.  On Tuesday, Perez Hilton was shut down for several hours after the Australian company that hosted his site dropped him.  On Wednesday, the site was back-up on someone else's server.

Perez, born Mario Lavandeira, is the target of several lawsuits from paparazzi and publishers who say he uses their photos and videos without consent and without paying.

Those suing Lavandeira say he has refused to pay fees to license the photos or to even give them credit for snapping the pics.

Perez says he has a right as a journalist to use the images for free saying his commentary constitutes "fair use" and is protected by copyright law.  At PerezHilton.blog, you'll find photos of your favorite (and least favorite) celebs with crayon like drawings and writings similar to the fine artwork on the picture accompanying this post.

X17online.blog co-owner Brandy Navarre says her company has sent more than a dozen notices to the company that was hosting PerezHilton.blog before Tuesday demanding that copies of the copyrighted photos be removed.

"They quickly realized it wasn't worth taking on this liability just to host this one client who was a repeat infringer," Navarre said Thursday.

On Tuesday, that company Crucial Paradigm sent a harsh letter to Lavenderia warning him of what was about to happen.

"Please note that with any other provider this would have been done a long time ago, and moving your site to another provider will not solve this issue," the letter read. "Continued abuse is leaving us more liable each day, which we can't afford."

Perez Hilton is being sued by x17online and other photographers who have unsuccessfully tried to get a judge to issue an injunction on his site yanking it off the web until the issue is resolved.

Perez, who is a friend of gaysocialites.blog, can't comment on the situation.  His attorney Bryan J. Freedman issued this statement:

"Having lost its attempt in court to stop perezhilton.blog when the judge denied their injunction attempt, X17 now seems to brazenly admit to resorting to threats and intimidation in an attempt to shut down the Web site," Bryan J. Freedman, Lavandeira's lawyer, said Thursday.

His site is now hosted by a company called Blogads, which places ads on various Web blogs, including gaysocialites.blog and PerezHilton.blog.  Now the photographers are evidently going after Blogads.

This has to stop, because now you're steppin' on my toes!  Perez's lawsuit could make history and create new guidelines for bloggers.

In an ideal world, we could all just work peacefully.  We always remove photos when asked, but we also see Lavenderia's point.  Blogging is somewhat of an expression.  You do it to tell what you think.  By doing so, it sometimes helps to use and alter photos.  It's not like we are trying to write a piece for the New York Times or the Village Voice.

But then again, we aren't all PerezHilton.blog getting hits by the billion each day.

TrackBack URL for this entry:
http://gaysocialites.blog/magazine-mt/mt-tb.fcgi/1449