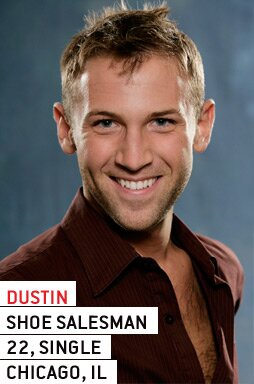 Every reality show has to have their token gay, but this year on America's Big Brother 8 on CBS two fags are better than one!

Big Brother 8 has pitted three sets of enemies against each other.  Two chicks who are fighting over a $5 loan in high school and an estranged father/ daughter duo join two ex-boyfriends.

We were first introduced to Joe.  He was a bit out spoken and quirky, but once Julie Chen announced that there were "enemies" living in the house, Joe went a bit psycho telling the whole house about his ex-boyfriend Dustin who gave him gonnorea.  Gag!

Joe evidently assumed he got the clap from Dustin, so he dumped him and tried to ruin his life.  From what I understand, Joe turned all of Dustin's friends against him and slept with his BFF.  Totally shady.

Dustin even tried to shake hands with Joe when he was going around the room introducing himself, but Joe turned his nose in a hissy.

I'm watching Big Brother 8: After Dark on Showtime, and it doesn't seem like they are talking yet.  We'll have to see what happens.

I'm not too pleased with the homos in the house so far.  Maybe this is why they haven't put too gays on the same show before?!

I found Dustin to be very offensive. please have him clean up his mouth.

Dustin was not offensive. Mr. gone aria was extremely offensive. To make a public announcement on national TV, like that was just completely uncalled for and doesn’t do anything to help the gays of our nation.

Thanks for the double dose of negative stereotypes, CBS.

Can't they ever portray gay people who are not queens. I am a physician and I am gay. I am a big brother fan, but the two in the house are the extreme not the majority.

TrackBack URL for this entry:
http://gaysocialites.blog/cgi-sys/cgiwrap/cwinters/managed-mt/mt-tb.cgi/1579