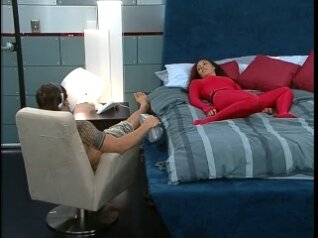 As the new Head of Household in the Big Brother house, Jen has nominated two of her fellow houseguests for eviction.

On Saturday, Big Brother held the second Power of Veto competition.  This spoiler report has the winner!

As we mentioned before, Jen has nominated the estranged father/ daughter duo of Dick and Daniele for eviction.

On Saturday, the house guests competed for the Power of Veto giving them the authority to remove either Dick or Daniele from the proverbial chopping block.

I'm not sure how the PoV competition went down on Saturday, but Daniele walked away the winner.

I assume that she will veto herself meaning that Jen, as HoH, will have to replace that nomination with someone else.

We'll keep you posted after the PoV ceremony takes place.

TrackBack URL for this entry:
http://gaysocialites.blog/magazine-mt/mt-tb.fcgi/1659