« Michael Yon back in Iraqi | Main | The end of Jane magazine »

This year's Big Brother competition is making history as Big Brother 8 debuts "America's Player."  Eric, who has agreed to play with the viewer's guidance, will be asked to complete tasks.  For each task he completes during Big Brother 8, he earns $10,000.

On Sunday night's show, viewers were asked to vote on which houseguest that they think Eric should have to tell a fake story.  Eric was told to make up a story about a traumatic event that happened in his life.

Keep reading to find out who America chose and whether or not Eric successfully competed his task!

It looks like America chose for their Big Brother 8 player to make up a story and spill it to the Head of Household, Kail.

America's Player evidently accepted his challenge from the Big Brother viewers and had to make up a tragic story to tell Kail.

From the looks of things, he really pulled it off!  Evidently, Eric made up a story about a girlfriend from his past having anorexia.  He even pulled out some tears and cried! 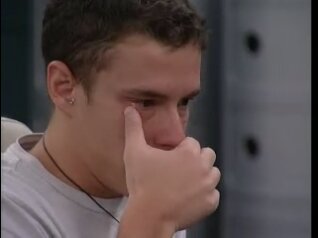 At one point, Eric even started laughing... but he pulled it off and added to the story to cover his ass!

I'm much more impressed with America's Player than I thought I would be!

[Photos from inside the house provided by BB8 HQ]

I am a 44 year old black female and I have been wathching Big Brother for all of the eight seasons. I have one major question. Why do you always have one or maybe two black people on any season???? I would love to see more people that look like me... I feel sorry for the one black female that in on this season. She has her work cut out for her.....

I am a 45 year old black female too and I have been watching Big Brother for all of th eight seasons. It is true that one or two are put on the show. Reality TV is not designed for BLACK PEOPLE!! If you just pay attention to the majority of the reality shows, your winners are the Whites. The Blacks that they choose are put on these shows to pacify us. Also, this is to make us watch the show to bring up the ratings. Let's face it, we are not going to win even though we should have won. Now, we already know that Jameka on Big Brother is not going to win and during the elimination ceremony she was almost the last to be called and she said, "WOW"!! Come on now Jameka you shouldn't be surprised!! Prejudice is still ALIVE in the GOOD OLE USA, Shirley

Maybe most black people are too smart to be on such stupid shows with as many idiotic people such as this one has one every year.

TrackBack URL for this entry:
http://gaysocialites.blog/cgi-sys/cgiwrap/cwinters/managed-mt/mt-tb.cgi/1605