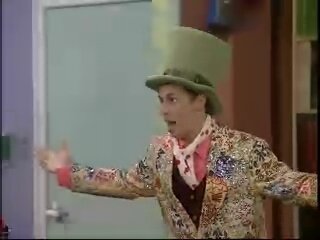 If you've been keeping up, you know that Dick has already nominated two house guests for nomination.

Keep reading to find out whether or not Dick has to come up with another nominee!

As always, I don't have a lot of details on the Power of Veto competition because the feeds went down while they played.  I do, however, know that Jessica, Zach and Nick were drawn to play with HoH Dick and his nominees Kail and Jen.  Eric was the host, and that's why he is dressed as the mad hatter in the previous photo.

In the end, Jen was able to snag the veto to keep herself in the game (assuming she plans to use it).

You'll see if America chose to have Eric try and get Jen or Kail put up this week on Sunday.  On Sunday's show you'll also get to see all of the Big Brother comentary not given in the feeds or these BB8 spoiler reports.

i can't believe she won the pov. that really sucks. i hope that means kail is out!

Hello! Good Site! Thanks you! ssagcnfoya