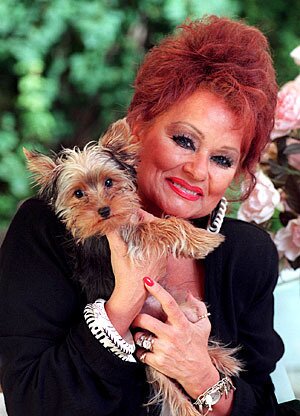 She was our most positive inspiration here at gaysocialites.blog, that's why we are very sad to report that Tammy Faye Bakker Messner has passed away.

Tammy Faye went to be with the Lord on Friday morning. She was 65 years old. Keeping to her wishes, her body has already been cremated and buried.

"She died peacefully," according to Larry King who reported the news late on Saturday.

Tammy Faye appeared on Larry King Live Thursday night in what many called her dying wish.  At the time, Messner seemed to be holding on to nothing more than faith.  She requested the interview with King who had been her long time friend so that she could address her fans at least one last time.

This news is very hard for us to report.  Our thoughts and prayers go out to her family.

May Tammy Faye rest in peace forever.  We are confident that she has gone to be with the God that she dedicated her life to serving.  She lived the most honest and joyful life of anyone with whom we have ever crossed paths.

We encourage you to try and not be sad. Tammy Faye shared a message of hope and love, and that is how she would want us to remember her.

We all now have an angel in heaven looking down on us.

(CNN) -- Tammy Faye Messner, the former televangelist and Christian singer who battled drug addiction and later inoperable cancer, died Friday morning, according to CNN's Larry King on Saturday night. He said the family had asked him to make the delayed announcement.

Messner was a guest on "Larry King Live" on Thursday. She said she couldn't swallow food, and weighed only 65 pounds.

King asked her Thursday if she were "a little scared?"

She responded, "A little bit," adding that she mainly worried about her family.

She made dramatic appearances on the now-defunct, Christian PTL Network she started with then-husband Jim Bakker, its host. Before millions of viewers, she would often break into tears, prompting her trademark heavy mascara to run.

After divorcing Bakker, who became steeped in money and sex scandals, she married Christian construction magnate and former PTL contractor Roe Messner in 1993. Tammy Faye was married to Bakker more than 30 years.

She underwent surgery for colon cancer in 1996. In 2004, she revealed that the disease had spread to her lungs, and in May 2007 she announced that her doctors had stopped trying to treating the illness.

In her appearance on CNN's "Larry King Live," Tammy Faye Messner was a shadow of her former self.

"I believe when I leave this Earth, because I love the Lord, I am going straight to heaven," she said.

King said she had sought the interview.

She told King she was bedridden most of the time, had trouble swallowing food -- hence the weight loss -- and was in near-constant pain.

But her sense of humor was still intact. On her Web site, she wrote on Monday, "I crave hamburgers and french fries with LOTS of ketchup! When I can eat that again, it will be a day of victory!"

Asked by King what she would most like to be remembered for, Messner replied, "well, my eyelashes." Messner wore heavy makeup -- her lip liner, eyeliner and eyebrows were tattooed on.

Born Tammy Faye LaValley in International Falls, Minnesota, she married Bakker in 1961. From 1966 to 1973, the Bakkers co-hosted "The 700 Club," on the Christian Broadcasting Network, founded by television evangelist and Christian Coalition founder the Rev. Pat Robertson.

They began the PTL Club -- with the initials standing for "Praise The Lord" or "People That Love" -- in 1974 and later expanded it into a television network. At the height of its popularity, PTL was bringing in revenues of more than $128 million annually and was carried on more than 1,300 cable systems with more than 12 million subscribers.

In 1978, the Heritage USA theme park opened at the network's headquarters in Fort Mill, S.C. The Heritage USA Grand Hotel was added in 1984 and a water park in 1986. That year, more than 6 million people visited the park, making it the nation's third most popular attraction after Walt Disney World and Disneyland.

On March 19, 1987, Jim Bakker resigned from the PTL in the face of a scandal involving an affair seven years earlier with Jessica Hahn, a secretary he paid to keep quiet. Hahn received a one-time $115,000 payment and monthly interest payments from a $150,000 trust fund.

And in December 1988, Jim Bakker was indicted for fraud and conspiring to defraud churchgoers of $158 million. Tammy Faye Bakker was not named in the indictment.

In 1989, Heritage USA and the Grand Hotel closed, and Jim Bakker was convicted of 24 counts of fraud and conspiracy and sentenced to 45 years in prison. Tammy Faye Bakker divorced him while he was incarcerated.

Asked in July what she would change in her life if she could, Tammy Faye replied, "I don't think about that, Larry, because that's just a waste of good brain space."

When King suggested that she might want to forget the PTL Club, she said, "I have gotten over that, thank God. That was a terrible, horribly bad experience."

The Bakkers' 30-year-old son, Jay, is a pastor who co-founded the Revolution Church in Brooklyn, N.Y. -- a church aimed at those who feel rejected by traditional approaches to Christianity, claiming on the church's Web site that he wrestled with religion after seeing the "excommunicative" treatment his parents experienced from the church following the scandal.

Tammy Faye has also been known as one of the few evangelical Christians who had the support of the gay community. She was one of the first televangelists to reach out to those with AIDS when it was a little-known and much-feared disease. In return, she told King in July, "When I went -- when we lost everything, it was the gay people that came to my rescue, and I will always love them for that."

She was able to bounce back after the PTL folded. In 1996, she co-hosted the "Jim J. and Tammy Faye Show" with gay actor Jim J. Bullock. In 2000, a documentary based on her life, "The Eyes of Tammy Faye," was nominated for the Grand Jury Prize at the Sundance Film Festival. And in 2003, she appeared on the WB network's reality show, "The Surreal Life."

Over her life, Tammy Faye also recorded more than 25 albums and wrote several books. In 1996, she wrote her autobiography, "Telling it My Way." She also wrote "Run to the Roar," a book about overcoming fear, and in 2003 wrote her last book, "I Will Survive, and You Will Too."

Despite her battle with cancer, Tammy Faye told King she kept her Christian faith, instructing her doctors not to tell her how much time they believed she had left. "I don't have any date written on me anywhere that says I'm going to die at any time, and so I just give it to the Lord," she said.

RIP Tammy Faye. Thank you for everything you have done for the gay community

I'm heartbroken. R.I.P. Tammy Faye. I know where you are and i know you're happy!

Wow...my heart goes out for the family...I found out on www.GospelMusicUpdate.blog

So sad for the family and her friends and all of us who LOVED her!

Wow...my heart goes out for the family...I found out on www.GospelMusicUpdate.blog

So sad for the family and her friends and all of us who LOVED her!

this is bitter sweet for me. i know she is where she has always wanted to be, but it is sad to see such a great person leave us. rip tammy faye.