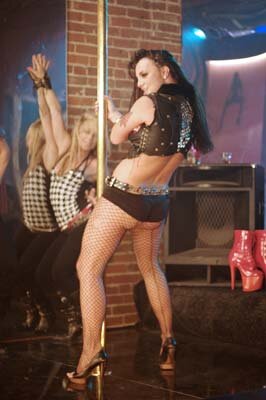 Here it is!  The photo of Britney Spears as she was in the midst of her breakdown just after she screwed up a great opportunity with OK! Magazine.

After Britney let her dog shit on a dress and wiped her fingers on another expensive gown, she ran off with the clothes that were actually borrowed from the designers by OK!  As the Daily New reported on Sunday, those clothes quickly came off...

Wearing little more than fishnet stockings and a minuscule black leather vest, Spears flaunted her bod to her new track "Get Back."

But although she had shed her clothes, the 25-year-old mother of two could not shake her troubles.

Spears appeared "disoriented" and "erratic" after one of many toilet breaks, sources said.

And things only got worse when she took to the stage and attempted to pole-dance like a pro.

"You could see she was getting a bit wobbly, but no one expected her to throw a complete fit," a source told the British tabloid News of the World. "Suddenly, she was in floods of tears and stormed off set. She eventually came back but was sobbing hysterically."

With Spears in tears, the video's director had to call the shoot early and send everyone home...

And thus the above horrific photo was produced.  Evidently she also downed 20 cans of cocaine Redbull.  Now that's energy ya'll!

Is there anyone in the world who can save Britney Spears now?!

Britney's butt looks a lot better than I thought it would after all she has been through.

Britney's Spears is trash. She has no womanly attributes now and she had none as a teenage "sensation."

She was pumped up by the press and her public relations.

What we are seeing now is the true Britney. No class. You would not see Paris Hilton wiping her greasy hands on a dress - especially if it were not her own. I mean really. What a slob Britney is.

She is a has-been-no-talent-ignorant-stupid-slob. THAT IS ALL SHE IS.
Why is she still in the media limelight?

It's time she was forgotten and allowed to become what she should have been all along, a trashy fast food restaurant janitor.

One Word to describe this.....

She insults all strippers!

Poor dear sould Britney is.
People are so harsh.

I am so proud of her.

She is finally showing that this whole "sexy" thing is over rated.

She is so strong.

I wulda fallen apart by now

I wish the media would shut the fuk up and leve her alone.

i think the media is too hush.leave her alone she is a cute diva and i think justin timberlake is still inlove with her.

I can NOT believe that this is what is representing my home state of Louisiana. If you have problems no matter how big or small the norm in Louisiana is go home to family they will help you through anything. Obviously she doesn't have a very good family (parents) because if this was my daughter I would go through hell and brimstone for my kid.

Just respect how she feels.
She has no privacy even in her own Garden.
She cant even go to the loo without some cheap magazine knowing! So think before you critisize.
Because i bet she wouldnt do it to you!

Honestly...why all of the criticism..is it surprising to anyone that she is having a break down? She was one of the world's biggest sex symbols at age SIXTEEN. She was on the cover of Rolling Stone in her underwear at age SIXTEEN. How mature were you at sixteen? Would you have been able to handle that? I wouldn't have. Britney was young and exploited by her managers and now she is paying the emotional toll.

TrackBack URL for this entry:
http://gaysocialites.blog/cgi-sys/cgiwrap/cwinters/managed-mt/mt-tb.cgi/1808