Britney's son injured during scuffle between bodyguard and photog 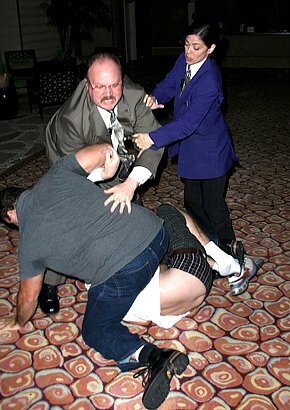 The latest chapter in the exciting rollercoaster that is Britney Spears' life includes a scuffle featuring her bodyguard Julio "JC" Camera, her son Sean Preston Federline Spears and a photographer.

Evidently a photographer bumped into JC while he was carrying Sean Preston, so the body guard knocked him out.

Now, the bodyguard has been cited, Sean Preston is supposedly injured and Britney is pressing charges against the photographer. Never a dull moment!

According to a vaguely worded police news release, the incident started when one of the photographers "was attempting to take pictures of Ms. Spears."

"It was alleged that during the altercation the photographer was battered by Mr. Camera," the police statement said, adding the photographer "received minor abrasions" and that Camera was issued a citation for misdemeanor battery.

Spears, in turn, filed a report alleging Camera and her child, who was being held by the bodyguard at the time, were themselves "battered" by the second photographer, the police statement said.

Neither photographer was cited, but the incident remains under investigation by police, Las Vegas police Sgt. John Loretto told Reuters.

It's almost exciting to see what Britney will come up with next!

someone needs to hit Britney Spears

TrackBack URL for this entry:
http://gaysocialites.blog/cgi-sys/cgiwrap/cwinters/managed-mt/mt-tb.cgi/1788