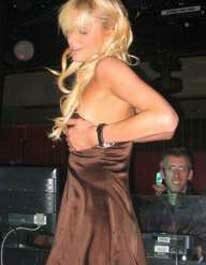 Jail bird Paris Hilton was evidently caught smoking weed outside of Teddy's nightclub in Los Angeles.  Hilton, who recently served 23 days in jail for breaking her DUI probation, told Larry King in her first post-jail interview that she had never done drugs.

Spy witnesses say that Paris got out of her SUV in a "cloud of marijuana smoke."  The New York Post has a source who says "she took a huge puff off a joint, then opened the door and exhaled the pot smoke basically in my face."

Paris' rep doesn't want to comment.  Of course he doesn't!  Do you remember what happened the last time a Hilton rep "advised" her on legal issues?

So big deal, she smokes from a joint. Was is her's? (where's the proof), oh btw, a joint IS NOT a drug according to the opiumlaw, but a SOFTDRUG. ALCOHOL actually KILLS people, and NOBODY has ever gotton an overdose of marihuana (or you have to smoke 170 pounds a day if you want to have an overdose. So technically Paris DIDN'T LIE to Larry King. For God sakes, marihuana is a PLANT well actually a weed, plant one in your garden and next year you can harvest your entire garden.

If she were smoking the manure of a donkey, she'll be prejudged on smoking drugs too, because you can also become high smoking a donkey's shit.

Oh and third, the first time she was spotted smoking weed was in The Netherlands which just happens to have a law there that you can legally have 5 grams as a citizen over there, and 3 grams if you are Belgian (we don't have a law, only our law isn't that dumb to just arrest and fill up our jailcells with people who don't belong there).

Oh btw, you weren't surprised when she puffed it out in your face didn't you? Learn to behave like a journalist and give the people room to properly get out without being photographed without panty or whatever, maybe then you'll get respect.

why does everyone have to be mean to clebreties? I mean if u were on u wouldn't like it if the whole world was talking about u. i think people r so crule 2 celebs. paris has had enough over the jail thing and it is her choise if she does it. if u did it u would be embarrased if it was u i think u would be really angry!!! u should just leave people alone and worry about ur own life instead of other peoples.

Who cares if she smokes weed? That's not a drug, that's a plant that grows naturally. My gramdmother takes it for migraines. Big whoop!!!!!

What all of you fools don't realize is that Ronnie Hokanson is one of the biggest potheads ever! He's posted on more than one occasion how much he loves paris and nicole for pot smoking because he, himself, is a stoner. So, he wasn't bashing pot smoking you brain dead hippies, just reporting the news and gossip... Maybe you would have been able to realize that if you hadn't all just taken a hit from the water bong!!! No Cheesie Poofs for you idiots!

wow......from all these comments, it's no WONDER american's are the biggest bunch of druggies.

TrackBack URL for this entry:
http://gaysocialites.blog/magazine-mt/mt-tb.fcgi/1632