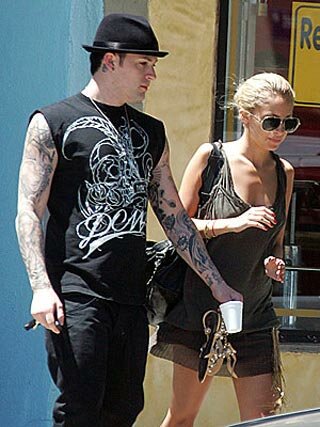 It looks like Lionel Richie is going to be a grandfather, and he may even end up taking care of the baby!

Nicole Richie has evidently been knocked up Good Charlotte frontman Joel Madden.  The two have been a couple for about 6 months, and according to InTouch magazine... they're getting married this summer.

TMZ.blog is reporting that Nicole Richie IS pregnant.

The starlet has been dating Good Charlotte frontman Joel Madden for over six months. Rumors have been swirling for months that Richie and Madden were expecting, but TMZ has confirmed through several sources that she is, in fact, with child.

The celebrity gossip site is also reporting that pregnancy can't keep Nicole out of the clink.  Richie may follow her BFF Paris Hilton to the slammer after she was pulled over driving the wrong way on a freeway near her California home.

TMZ says if Nicole goes into labor while in jail, she'll give birth at a county hospital and return to her cell within three days.  Ouch!

If Nicole does give birth while serving time, the alleged baby could end up with Joel or with Mr. Lionel Richie.  At his age, there's no chance he can be up All Night Long with a baby.  He better hope Nicole gets off the hook!

haha omg thats a scary thought though. i love good charlotte and joel is one of the hottest guys ever. see, if he would have stayed with hilary, he wouldnt be having a baby with an anorexic drug addict.

TrackBack URL for this entry:
http://gaysocialites.blog/cgi-sys/cgiwrap/cwinters/managed-mt/mt-tb.cgi/1552