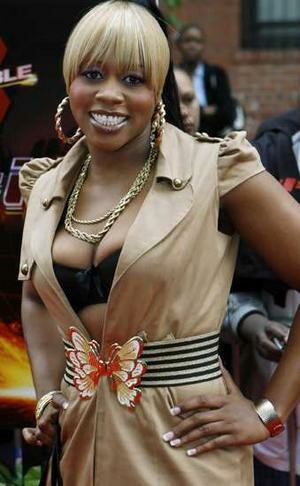 After spending the day running from the cops, rapper Remy Ma was arrested for attempted murder after trying to shoot her "friend" Makeda Barnes-Joseph  in the leg.

The Bronx thug, born Remy Smith, turned herself in on Saturday (after probably realizing that she can't run forever).  Remy was also charged with assault and criminal possession of a weapon.

Ha, ha, ha!  No one is above the law, even if you are a d-list rapper who looks like a drag queen.

NEW YORK (Reuters) - Female rapper Remy Ma was arrested on attempted murder charges in the weekend shooting of another woman in a nightclub district of Manhattan, police said on Sunday.

The Grammy-nominated rapper, whose real name is Remy Smith, turned herself in on Saturday and was also charged with assault and criminal possession of a weapon.

The victim suffered a gunshot wound and was hospitalized in stable condition. The shooting occurred in New York's meatpacking district, a popular nightlife area near Greenwich Village.

The shooting followed a dispute after Smith and her companions left a nightspot. Local media reported the women were friends, and the victim identified Smith as having shot her.

Smith, 26, a Bronx native and resident of Cliffside Park, New Jersey, won the 2005 BET award for best female hip-hop artist and was nominated for a Grammy in 2004 when she performed with Terror Squad for "Lean Back." Her solo hits have included "Conceited" and "Feels So Good."

this ugly lady is going to come looking for you if you aren't careful!!