« Perez Hilton announces show, gets spanked on the View | Main | This week in Britney Spears »

The History of Friday 13th!

While this holiday might mean bad luck to most, for us its just another reason for a crazy weekend of parties!

If you want to know the history behind Friday, 13th keep reading below.  If you're looking for the weekend party line-up, here it is! 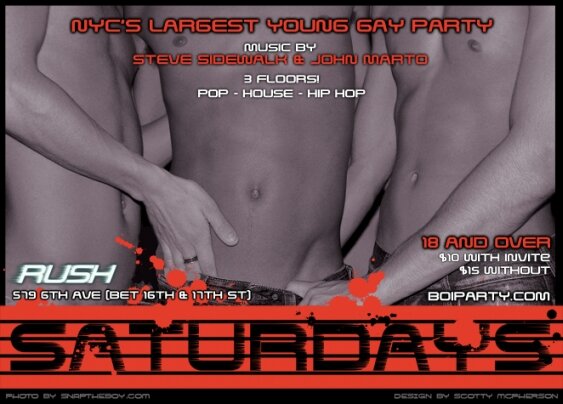 Rocking Out Anija Cox at Rush, 579 Sixth Ave (@ 16th St), gaysocialites.blog Anija Cox didn’t pull a Winehouse—she loved every minute of rehab! Now she’s going from the sick house to this Chelsea twink haunt for a one night only showstopper, bringing trademark flash and sass to the stage for a fierce rendition of “Dreamgirls”. DJ Steve Sidewalk and John Marto spin. $5 frozen drinks till midnight. 10pm; $10 with invite/or flyer; $15 general admission.
Thanks Next Magazine!

Publicity Whores Hot Mess at Porky’s, 55 W 21st St (btwn Fifth/Sixth Aves), gaysocialites.blog, porkysnyc.blog Hot Mess is all about gossip, attention and the pleasures of paparazzi as they root out the new face of scandal. Pull a Lindsay as a fleet of photographers scour the dance floor for a new tabloid queen that’s destined to be the talk of GaySocilites.blog on Monday morning. Let the open bar till 11pm relsease your inner Paris. 10pm; $5. Thanks again Next Magazine!

History of Friday the 13th

No historical date has been verifiably identified as the origin of the superstition. Before the 20th century, although there is evidence that the number 13 was considered unlucky, and Friday was considered unlucky, there was no link between them. The first documented mention of a "Friday the 13th" is generally listed as occurring in the early 1900's.[1][2][3]

However, many popular stories exist about the origin of the concept:

One theory, offered in the novel The DaVinci Code holds that it came about not as the result of a convergence, but a catastrophe, a single historical event that happened nearly 700 years ago. The catastrophe was the decimation of the Knights Templar, the legendary order of "warrior monks" formed during the Christian Crusades to combat Islam. Renowned as a fighting force for 200 years, by the 1300s the order had grown so pervasive and powerful it was perceived as a political threat by kings and popes alike and brought down by a church-state conspiracy, as recounted by Katharine Kurtz in Tales of the Knights Templar (Warner Books: 1995):

"On October 13, 1307, a day so infamous that Friday the 13th would become a synonym for ill fortune, officers of King Philip IV of France carried out mass arrests in a well-coordinated dawn raid that left several thousand Templars — knights, sergeants, priests, and serving brethren — in chains, charged with heresy, blasphemy, various obscenities, and homosexual practices. None of these charges was ever proven, even in France — and the Order was found innocent elsewhere — but in the seven years following the arrests, hundreds of Templars suffered excruciating tortures intended to force 'confessions,' and more than a hundred died under torture or were executed by burning at the stake."

There are drawbacks to the "day so infamous" thesis, not the least of which is that it attributes enormous cultural significance to a relatively obscure historical event. Even more problematic, for this or any other theory positing premodern origins for Friday the 13th superstitions, is the fact that no one has been able to document the existence of such beliefs prior to the 19th century. If people who lived before the late 1800s perceived Friday the 13th as a day of special misfortune, no evidence has been found to prove it. As a result, some scholars are now convinced the stigma is a thoroughly modern phenomenon exacerbated by 20th-century media hype.

Also, according to Snopes.blog, an urban legend affirming-or-debunking website, "the claim that the Friday the 13th superstition began with the arrest of the final Grand Master of the Knights Templar, Jacques Demolay, on Friday, October 13, 1307, is a modern-day invention.

Effects in people and cultures

"It's been estimated that [U.S] $800 or $900 million is lost in business on this day because people will not fly or do business they would normally do." [4]

Some people are so paralyzed by fear that they are simply unable to get out of bed when Friday the 13th rolls around. The Stress Management Center and Phobia Institute estimates that more than 17 million people are affected by a fear of this day. [5] Despite that, representatives for both Delta and Continental Airlines say that their airlines don't suffer from any noticeable drop in travel on those Fridays. [6]

A British Medical Journal study has shown that there is a significant increase in traffic-related accidents on Friday the 13ths.[7]

too much Jason Preston, I don't want anymore

TrackBack URL for this entry:
http://gaysocialites.blog/magazine-mt/mt-tb.fcgi/1647