This week in Britney Spears 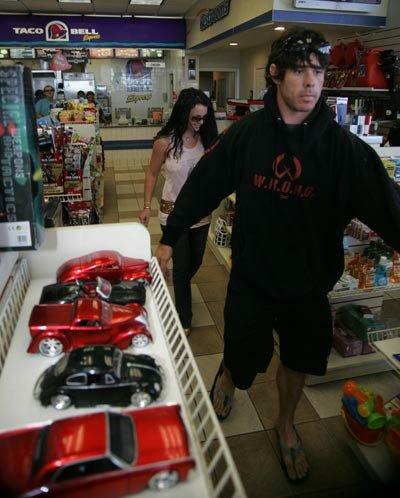 It's never easy being Britney Spears, but this week has been a bit more difficult for the former pop tart.

Not only did Britney have to foster her continued battle with her mother, Lynne, but she also canned her assistant/ cousin Ali too.  In addition, Spears had to face speculation that she is boinking her bodyguard.  We're not done yet, Britney has a stalker and you'll never believe what he is doing for her kids!

Rumors were flying late this week that Child Protective Services had visited Spears' mansion and found it unfit for the kids.  On Friday, TMZ reported that as untrue saying that its Britney's stalker who keeps calling child services on her, and he's "a nut."  Evidently there is no truth in the allegations that Britney removed the two tots and headed for the Four Seasons in Beverly Hills.

On Friday, we also got reports that Britney is having problems with her K-Fed again as he is threatening NOT to sign the divorce papers saying he may go for full custody of the boys.

If there is a such thing as good news for Britney, this would be it - she's evidently planning an album release for Christmas.

I'll have to see it to believe it!

have you tried to ask yourself about your comment? Come on your bullshit, don't you know that Britney will be forever famous. She's really one of a kind, sorry!!!

TrackBack URL for this entry:
http://gaysocialites.blog/cgi-sys/cgiwrap/cwinters/managed-mt/mt-tb.cgi/1648