Big Brother 8: Daniele and Amber to appear on Power of 10 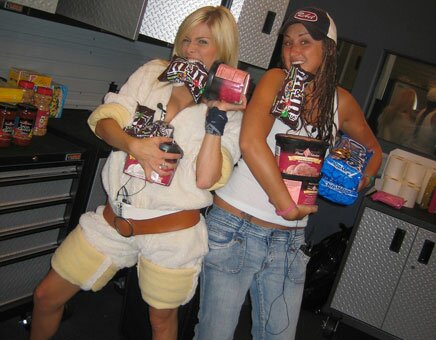 CBS is trying to help out their new lackluster game show Power of 10 by cross promoting with two players from their successful summer reality series Big Brother.

Two Big Brother 8 house guests competed in a competition where they won the power to save one of their house guests from being booted from the game and the opportunity to leave the house to appear on Power of 10.

You can tune in to see Daniele and Amber on the Power of 10 this Tuesday at 8pm EST on CBS.  If Daniele beats Amber and gets to play for the big bucks, then we'll also see a cameo by her "boyfriend" in the Big Brother house former football player Nick Starevic.

The next episode of Big Brother follows Power of 10 on Tuesday at 9pm EST.

Actually this is a question.
Do we have to watch power of 10 to see what happened with Dani & Amber, or will Big Brother show us the episode?

I am one of the strange "rare" people who are on Central standard time. So this Pacific and Eastern standerd times has me all screwed up.

Big Brother comes on every night at 11:00 PM central time, BTW I am in Missouri. It lasts from 11:00 PM until 2:00 AM. So when I hear them talking as I watch the show and someone says "it's nine PM hello Showtime" I just get lost.

Also, I am a straight woman (I know boo me, lol) Was Dustin not the hottest guy on BB?? I still can't picture him with Joe. Nick was hot, now I could picture him with Dustin what a beautiful couple.

TrackBack URL for this entry:
http://gaysocialites.blog/cgi-sys/cgiwrap/cwinters/managed-mt/mt-tb.cgi/2061