Big Brother 8 SPOILER: Is the America's Player twist over? 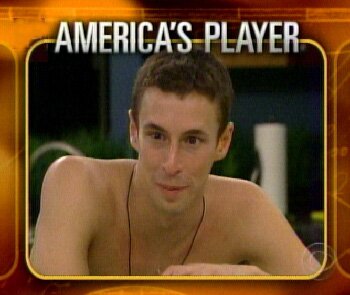 Daniele and Dick continue to rattle the Big Brother 8 house.  Even though Daniele is Head of Household, Dick seems to be helping to call the shots.

On Sunday night's show on CBS,  Jen used the Power of Veto to remove herself from the nomination block.  Daniele replaced Jen with Eric, America's Player.

Keep reading to find out the breaking news in the Big Brother house.

On Wednesday morning's Big Brother After Dark on Shotoo, Dustin told Jessica that it would be stupid to vote Eric out at the is point, because he is a guaranteed vote in their favor.

I don't think Amber and Jameka will keep this decision until Thursday.  If they do, then they are screwing themselves especially if Kail and Jen remain aligned with Dick and Daniele.

I bet the Big Brother producers will be pissed if the twist ends this early.

The producers of Big Brother 8 put Eric at a disadvantage by making him America's player. He's been forced to do things that he wouldn't have done otherwise, and now he's up for elimination. Most of the idiots in the house are too scared of Dick to think for themselves. Why can't they stand up to that dirt bag? There is power in numbers!

TrackBack URL for this entry:
http://gaysocialites.blog/magazine-mt/mt-tb.fcgi/1901