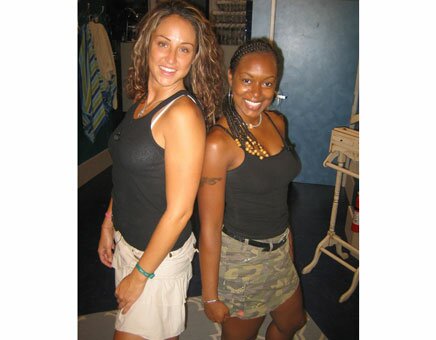 Daniele is the Head of Household for the second time on Big Brother 8, and she has fulfilled her promise to her father Dick, Eric and Amber to run their alliance to the final four.

Daniele has nominated Amber and Jameka for eviction, but her real target is Jen.  Keep reading to find out the details of this week's Golden Power of Veto.

Daniele has a much better strategy than I thought.  Her strategy seems to have two parts.  The first part is to get rid of the people who she doesn't want to go against in the final two.  The second part is to win as many competitions as possible to prove that she was ultimate player if she is in the final two.

As we already mentioned, Daniele has won Head of Household twice and now she was won the Golden Power of Veto three times.

In today Veto ceremony, Daniele used the PoV to remove Amber from the block and replaced her with Jen.  Jen probably soiled herself.

At first I worried about Daniele removing Amber from the block, because Amber and Jameka have already realized that Eric and Jessica are working Daniele and Dick.  But then I realized, it doesn't really matter who goes home this week as long as it isn't one of those four in that alliance.

There really isn't a very good chance that Amber and Jameka will be able to get rid of any of those alliance member especially since Zach is floating with the alliance of 4 as well.

TrackBack URL for this entry:
http://gaysocialites.blog/magazine-mt/mt-tb.fcgi/2022