Big Brother 8: Who flew that banner over the house? 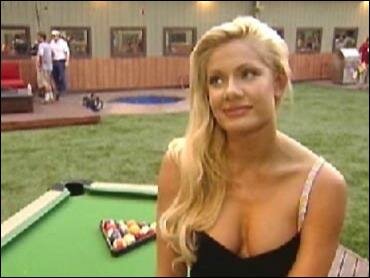 An aspect of the Big Brother game that has never been revealed to viewers on CBS before was brought to light on Sunday night's show.

For years, fans have flown planes toating banners across "the back yard" and over a production lot in California.  The banners have done such things as shown their hate for the "Nerd Herd Alliance" headed by Big Brother 6 winner Maggie or tried to warn house guests about twists.

On Thursday night during the Head of Household competition, someone paid to have an airplane fly over the house that read, We ♥ Nick!  Amber & Eric Lies. LNC= Nerdherd."  If you saw the show, you saw how upset it made Eric.

According the master mind behind Big Brother 8 HQ, Misty Firestone, the houseguests were required to put bags over their head in an attempt to hide the banner before just giving up.

They made the Hg's wear bags over their heads, till they couldnt breathe anymore... lol. Then made them get down on the ground, face down, to wear they couldnt see it," Misty says.

But who ordered that "banner plane" to go by the house on Thursday?  Misty says the banner could be the product of players from previous Big Brother seasons.

"I also found out that Janelle (from Season 6 & 7) and her rich friends are the ones that flew the plane over.  They hired 30 banner planes to fly over the house till someone saw it, and what better time for the HG's to see it, while they are doing an endurance competition (sic)," Misty added.

Update: Misty is also our special Big Brother Coorespondent, and she wrote an article to clarify where she got this information. Click here to check out Misty's response.

The idea that Janelle Pierzina, one of the biggest advocates for Gays and Gay rights, one person who has shown all sorts of acceptance and love for Gays and the Gay community, would be roasted on this board without any proof whatsoever of her guilt just blows my mind!! Misty Firestone, if she has the PROOF, needs to show it or shut the hell up. Janelle has stated on more than one occasion that she did NOT have anything to do with the banner planes that flew over the house. She stated that she kidded about doing it, but did not, and that if she had, she would never do anything to hurt Eric because she likes him and likes the "twist" of America's Player. This is unbelievable to me!

Janelle had nothing to do with those banner planes, She inquired about them and joked that ti would be funny to send some nick love his way, but would never purposely screw with the cbs show, and I know for a fact she was not involved. And WTF? 30 banners, i think there was maybe like 4-5, talk about talking out your ass!

Janelle had nothing to do with these banners. She inquired about fans doing it and thought it would be cute to send some Nick love to him, but never sent any banners. I know for a fact she was not involved. And seriously WTf? 30 banners? Please get your facts straight it was maybe 4-5. Stop talking out of your ass Misty.

This accusation is totally not founded and very inflammitory to Janelle. Janelle has stated that was not involved and she has publicly stated that she likes Eric, as well as Nick. I think Misty Firstone is telling tales. The banner should read " I heart Nick, Amber and Misty lie. LNC = Nerd Herd."

TrackBack URL for this entry:
http://gaysocialites.blog/cgi-sys/cgiwrap/cwinters/managed-mt/mt-tb.cgi/1875