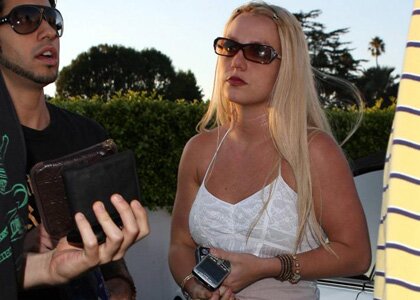 Britney Spears has managed to land herself some more free negative publicity!

Now the former pop superstar is being investigated for child abuse.   TMZ is reporting that Britney is about to face an in depth look into her mothering skills by the L.A. County Department of Children and Family Services.

The celebrity gossip site is also reporting that Britney isn't be accused of beating her kids, instead she is being investigated for because her kids have poor dental hygiene, as well as poor eating and sleeping habits.

Most speculate that the papers were filed by Kevin Federine's attorney Mark Vincent Kaplan.

I think its very unfair, yes has goon true enough things, and now they are trying to take away their babies. She can be everithing they say but shes a woman and a mommy, and just for that she deserves respect, Its obvioly what K-Fed its trying to do, ruin poor Britney, I hope he goes to hell ¡¡¡¡

For a classic image of Brit and the girls please go to:
http://www.imagekind.blog/GalleryProfile.aspx?GID=e5e4e7e5-1c93-4db5-b7fd-80c2bf2c2fb8

Poor dental hygine???? Poor eating and sleeping habits???? Give me a fricken break!!!! This is so stupid. I am no fan of Britney Spears but even I can see she is getting a raw deal here. Since when is it child abuse for not brushing teeth, for an infant to not go to sleep at a regular time, or to not eat a well balanced meal??? Why hasn't anyone accused Angelina Jolie of child abuse for dragging her kids all across the world? I know those kids couldn't possibly have a good sleeping schedule. Just because Britney dresses and conducts herself in a questionable manner doesn't mean she is abusing her children. I am sure there are thousands of low income families who have a lot worse issues plauging their children. Are we going to start investigating those families??? This is all so sad. What I wish for britney is that she could just go into hiding for a while, with her children, and let this blow over. She doesn't help her case by being on the front of every tabloid paper half dressed. But just because she is doing that, doesn't make her a bad mom for crying out loud. There is only one thing to call this and that is a WITCH HUNT. Hang in there Britney.

TrackBack URL for this entry:
http://gaysocialites.blog/cgi-sys/cgiwrap/cwinters/managed-mt/mt-tb.cgi/2094