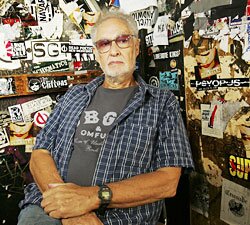 The founder of New York City's punk rock club, CBGB, has died at 75.  Hilly Kristal used CBGB to help unsigned bands such as the Ramones, Blondie and Talk Heads make it big.

He founded the club in 1973 hoping to showcase country music, calling it CBGB & OMFUG, for "Country, Bluegrass, Blues and Other Music For Uplifting Gourmandizers."

But the club drew few country acts and instead became a breeding ground for punk rock, playing host to the likes of Patti Smith, Television, Living Color as well as countless local hopefuls that never made it to the big time.

"He loved country, but he loved music even more, and as a singer-songwriter himself, he knew rock musicians needed a place to play their own music," his daughter said.

Mark Ramone of the Ramones said in a statement, "Hilly was an integral part of the punk scene from 1974 until his death."

"He was always supportive of the genre," he said. "In an era when disco was the mainstream, Hilly took a chance and gambled. The gamble paid off for both him and for us. We are all grateful to him and will miss him."

Johnny Rzeznik of the Goo Goo Dolls, who first played CBGB in the late 1980s, said agents from recording companies often came to the club. "So many bands would have never have made records unless they came to CBGB," he said.

Kristal was born in Manhattan but his father moved the family to Hightstown, New Jersey, soon after. He became a concert violinist by the age of 9. In the late 1950s, Kristal sang in the men's chorus at Radio City Music Hall.

He went on to manage Manhattan jazz haunt the Village Vanguard, booking acts like trumpet player Miles Davis. He opened a bar that served sandwiches, such as the Hilly burger, that later became CBGB.

"He wanted the club to survive him," his daughter said. "He is survived by the fans and bands that played there."

TrackBack URL for this entry:
http://gaysocialites.blog/cgi-sys/cgiwrap/cwinters/managed-mt/mt-tb.cgi/2115