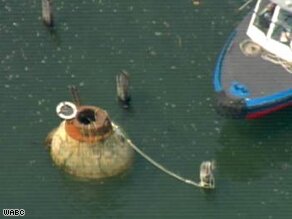 What a way to start of Saturday morning than with some news of the weird?!

A man in New York was picked up Friday after authorities found his small, homemade submarine like water craft floating to the surface near the Queen Mary 2 which is currently docked in the Buttermilk Channel off Red Hook in Brooklyn.

Philip "Duke" Riley and two other men were found floating inside the replica of the 1776 "Turtle submarine."  Cops took them in for questioning, but they simply are calling it a case of "marine mischief."

Riley is evidently an artist who built the replica Revolutionary War submarine of wood and fibreglass.

The makeshift sub "is the creative craft of three adventuresome individuals," Police Commissioner Ray Kelly said in a statement. "It does not pose any terrorist threat. ... We can best summarize today's incident as marine mischief.''

The sub was evidently had no steering or communications mechanisms on board.

TrackBack URL for this entry:
http://gaysocialites.blog/magazine-mt/mt-tb.fcgi/1857