« Spotted: Mischa Barton moving out of her Hoboken pad | Main | gaysocialites.blog is gossiping about a whole lot more! » 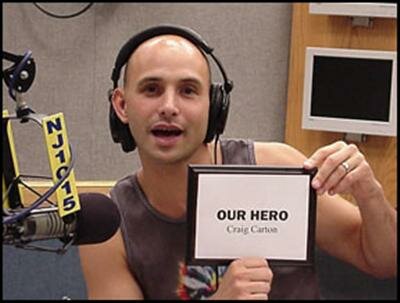 WFAN in New York announced on Tuesday that New Jersey radio disc jockey Craig Carton and former NFL quarterback Boomer Esiason will take over as their morning co-hosts after Labor Day.  The spot was vacated by Don Imus when he was fired over what some considered racist remarks.

Carton is no stranger to causing controversy with offensive comments.  As co-host of "The Jersey Guys," a talk show on New Jersey radio station WKXW-FM, Craig has been known to offend minorities and women.

Meanwhile, Imus and CBS radio "have mutually agreed to settle claims that each had against the other regarding the Imus radio program on CBS," according to a statement released by the network Tuesday.

Imus is also planning a comeback according to insiders at WABC radio.  He and the CBS rival are evidently in talks to bring Imus in as the host of their morning show.

Don't expect any trash talking though, there is evidently a "non-disparaging" agreement involved in the Imus/ CBS deal meaning that neither party can talk poorly of the other.

That takes all of the fun out of it!

TrackBack URL for this entry:
http://gaysocialites.blog/cgi-sys/cgiwrap/cwinters/managed-mt/mt-tb.cgi/1958