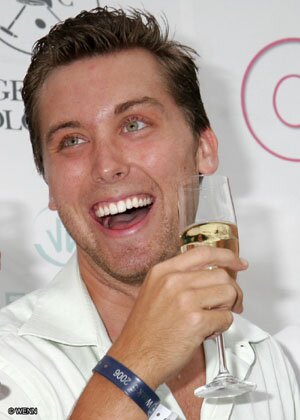 The cat fight between Lance Bass and New York magazine continues as they posted this response on their website to Lance's Myspace blog in which he referred to the person who interviewed him as a "dumb reporter."

In this week's issue of the magazine, former 'N Sync star Lance Bass talks to New York's Jada Yuan about battling the city's real-estate market (he's in town to appear in Hairspray on Broadway): "There's a lot of crap here for a lot of money," he said. "I don't think anyone here has any style. I was looking at fully furnished places and it was like, you can either have a bunch of floral prints or some dusty couch from the 1960s."

He also told us about dining at Justin Timberlake's restaurant: "I've been up there a few times … But it's really up there. The Upper East Side? I'm not in college anymore."

But now Bass feels compelled to impugn our reporting, both on his MySpace page and in a statement to Vulture. See the statement, and our refutation, below.

We were going to be nice about this, because we're actually quite fond of Bass, but then we heard that he called Ms. Yuan a dumb reporter on MySpace. So we invite Bass to breath deeply, stop reading Perez Hilton (who posted the story on his own site under the typically over-the-top headline, "Lance Bass Hates New York City"), and take some lessons in reading comprehension. Bass's beef boils down to two points — he says he didn't say New Yorkers have no style, and he does go to Justin Timberlake's restaurant. Oh, and he really loves New York!

New York would like to make the following points: (1) We stand by the interview; Bass was not misquoted. (2) Bass is not quoted as saying New Yorkers have no style — it's clear that he's referring to the apartments he looked at. (3) The piece also does not suggest that Bass doesn't hang out at Justin Timberlake's restaurant. In fact, it specifically quotes him as saying he goes there. (4) Though Bass's quote about his dancing ability ("I was the worst dancer in the band") has not been called into question, we'd like to reiterate that Bass was, indeed, the worst dancer in 'N Sync. (5) Bass now says he's going bi-coastal; he never mentioned that to us, but we're glad to hear it! Welcome to New York, Lance.

Here's his letter in full:

Last week your reporter called me on my cell phone to ask me a number of questions in conjunction with my joining the cast of the Broadway hit musical Hairspray. She came to see me in the show but she didn't come to the after party so she requested an interview later.

I made the comment to her (that she recorded so there is no excuse for the misquote) that when trying to find an apartment here, the first two I looked at had no style. She reported that I said New Yorkers had no style, which I never said. What was conveniently left out was my statement that I am having a great time here, I love the city and I now plan to get a permanent residence here and be bi-coastal.

I'm sorry floral print couches were reported on in my piece and nothing mentioned of this incredible musical, Hairspray, that I am in and how excited I am to be working and living among some of the greatest people on the planet.

You know what I say, bad publicity is still publicity!

Now come to Hot Mess on Sunday, Lance.  I'll get you tons of publicity from that!

I actually like Lance Bass... unless he doesn't come to Hot Mess at Porky's this Sunday... then I'll probably hate him.  We'll see.

lance bass is a tool.

he's popular now cause he's gay, not because he's talented or good looking...he's neither.

boys wanna do you cause of the money, without that you would be just another ugly idiot at a club.

TrackBack URL for this entry:
http://gaysocialites.blog/cgi-sys/cgiwrap/cwinters/managed-mt/mt-tb.cgi/2103