Lindsay Lohan gets off easy with one day in jail 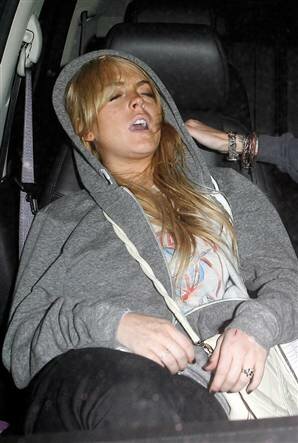 Nicole Richie isn't the only celebutante who got off easy today.  Lindsay Lohan pleaded no contest to seven offenses on Thursday and got slapped on the wrist.

The drunken druggie Lindsay Lohan will only serve 1 day in jail topped off with 10 days of community service and three years of probation thanks to a plea deal.

Lohan, who has become the poster child for driving under the influence of drugs and alcohol, must have a much better lawyer than both Nicole and Paris Hilton who have also seen there fair share of trouble.  Speaking of Paris, she must be piiiiiised!!

"It is clear to me that my life has become completely unmanageable because I am addicted to alcohol and drugs. Recently, I relapsed and did things for which I am ashamed. I broke the law, and today I took responsibility," Lohan said in a statement.

Lately Lindsay has been walking dogs, working out and tanning at a rehab facility in Utah.

Lindsay had cocaine on her both times, but the amounts were below the a half a gram mark which is required for more serious felony charges of drug possession, the Los Angeles County District Attorney's office said.

Following an hour-long pow-wow in Beverly Hills, at which Lohan's attorneys entered the pleas, the Los Angeles County DA said Lohan did not receive any special consideration because she was a celebrity.

Lindsay Lohan, Paris Hilton and Nicole Richie are all poor role models. They're a bloody mess!

TrackBack URL for this entry:
http://gaysocialites.blog/cgi-sys/cgiwrap/cwinters/managed-mt/mt-tb.cgi/2055