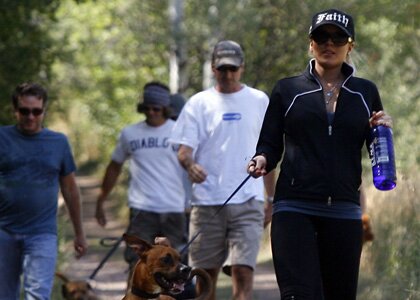 For a while it looked like Lindsay Lohan freedom had gone to the dogs.... but that doesn't seem to be the case anymore.

Much to my dismay, Lindsay Lohan might get off with a slap on the wrist and avoid prison time!  I know, it's a shame.

According to TMZ.blog, "there is a 'strong possibility' the Los Angeles County District Attorney's office will NOT file felony charges against Lindsay Lohan in connection with her two DUI arrests."

The gossip website is also reporting that the D.A. is unlikely to file cocaine charges related to her DUI bust on Memorial Day weekend.

The prosecutors could, however, Lindsay could get charged with cocaine possession and for carrying cocaine into a correctional facility... both felonies.  TMZ is also reporting that the D.A. is "inclined not to file those felony charges either."

UGH!  This is ridiculous.  Does this mean we can all carry small amounts of cocaine around with us?!

It looks like Lohan will only get misdemeanor DUI charges for both offenses.  Why is Lindsay getting off so easy?

"...we're told Lohan's mega-lawyer Blair Berk and prosecutors have been talking a lot and that spells a possible plea bargain," TMZ reports.

Lindsay may not even be required to attend Friday's arraignment.

Don't forget to come back to gaysocialites.blog on Wednesday for our expose on Lindsay and the other Hollywood It girls.

TrackBack URL for this entry:
http://gaysocialites.blog/magazine-mt/mt-tb.fcgi/2029