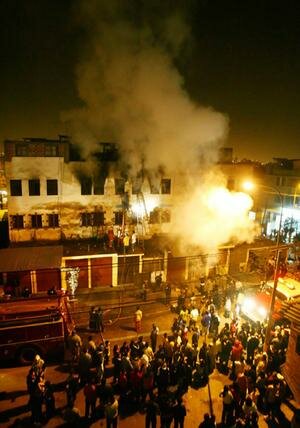 An earthquake shoot Peru on Wednesday killing at least 17 people while many, many other remain missing.

CNN is reporting that the earthquake measured a 7.9 and a Tsunami warning is in effect for Hawaii.

LIMA, Peru, Aug. 15 -- A powerful earthquake shook Peru's coast near the capital Wednesday, killing at least 17 people as it toppled structures and caused hundreds to flee office buildings in Lima. A tsunami warning was issued for South America's Pacific coast.

The cable news station Canal N reported that a church in the city of Ica, south of Lima, had collapsed, killing 17 people and injuring 70.

["There has not been a big catastrophe that we know of at this point," President Alan Garcia said in a radio address. Garcia urged residents of low-lying coastal areas to evacuate.]

The U.S. Geological Survey said the 7.9 magnitude earthquake struck about 90 miles southeast of Lima at a depth of about 25 miles.

The quake shook Lima for more than a minute, and some houses collapsed in the city's center. A shorter, weaker aftershock followed.

Firefighters quoted in radio reports said that many street lights and windows shattered in Lima but did not specify if there were any injuries. Hundreds of workers were evacuated from Lima office buildings after the quake struck and remained outside, fearing aftershocks.

The quake also knocked out telephone service and mobile phone service in the capital. Firefighters were called to put out a fire in a shopping center.

[In the Bella Vista area of Lima, which lost electricity, residents reported incidents of looting, according to Radio Programas in Lima.]

The Hawaii-based Pacific Tsunami Warning Center issued a tsunami warning for the coasts of Peru, Chile, Ecuador and Colombia and a tsunami watch from Panama to Mexico.

TrackBack URL for this entry:
http://gaysocialites.blog/cgi-sys/cgiwrap/cwinters/managed-mt/mt-tb.cgi/1987