« Seacrest gets yet another gig, now it's Emmy's | Main | More evidence in possible Jenna Bush pregnancy » 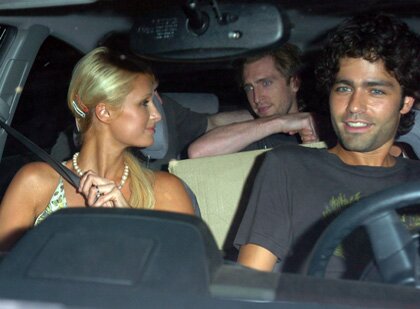 It must be official!  Paris Hilton and Adrian Gernier are a couple!  The two have spotted practically everywhere together, and while it seems like an odd match - it also seems to be true.

On Sunday afternoon, Adrian made a deal with the paparazzi that he and Paris would come out to be photographed if they would give Hilton Monday and Tuesday off.  Gernier used the official method of having the photographers raise their hands and say "I."

I guess the love birds want some alone time together.

It seemed that Paris and Adrian were having fun together.  If you watch the TMZ video, you will notice that a camera crew was following the new couple as they walked out.

Do you think either Adrian and/ or Paris are doing a reality show or something?!

Don't forget to come back on Friday when we'll have a GaySocialites expose on Hollywood's It Girls!  Bookmark us now!

TrackBack URL for this entry:
http://gaysocialites.blog/magazine-mt/mt-tb.fcgi/2020