The tabloids seem to be launching a campaign to save Britney Spears' son Sean Preston and Jayden James.

Who ever thought that K-Fed would be seen as the more responsible of these two boy's parents? 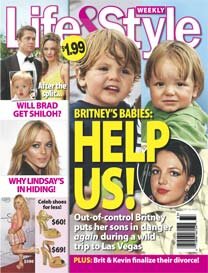 After a trip to the Jacuzzi at the Wynn Las Vegas hotel on July 26, Britney Spears expected to enjoy her relaxation. Instead, she found herself in another near disaster involving her babies. Her bodyguard, Julio “JC” Camera — who was carrying 22-month-old Sean Preston — got into a fight with photographers, one of whom bumped into JC and Sean. The terrified baby started crying and JC handed him to Brit before throwing the lensman to the ground and “punching him in the face,” according to the police report.

Jayden James, 10 months, was with another bodyguard and witnessed the violence, but neither he nor Sean Preston was injured. Still, notes a Brit insider, Sean was shaken. 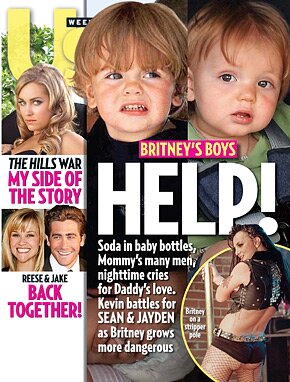 Sources tell Us Weekly that Spears’ friends and family have become concerned about the pop star’s mothering skills.

Case in point: The tooth fairy may be making early visits to 22-month-old Sean. “He’s having dental problems because Britney just shoves a bottle of juice in his mouth all the time to stop him from crying,” a family insider tells Us.

Another source says that, in April, Spears “asked an L.A. dentist if he would whiten her kid’s teeth!” The dentist refused.

Those close to the singer aren’t surprised that Spears’ lifestyle is wreaking havoc on her children’s teeth.

A Spears pal says the star “feeds them total crap like Doritos and soda,” and a source who has spent a great deal of time with Spears around the children says Sean’s mom has given him chewing gum, a known choking hazard for toddlers.

And when it comes to bedtime, forget soothing lullabies. "She fed Sean ice cream before bed because the cold would make him sleepy,” says the source who logged time in the singer’s home.

TrackBack URL for this entry:
http://gaysocialites.blog/cgi-sys/cgiwrap/cwinters/managed-mt/mt-tb.cgi/1834