WARNING:  This article contains promiscious X-rated video that should only be viewed by those who are 18 years or older! 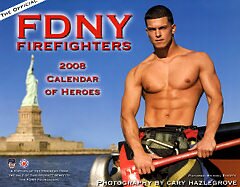 One of my favorite things about the New York Fire Department is that they put out a calendar packed with NYC's sexiest fire fighters each year.  Unforutnately there won't be a sexy NYFD calendar in 2008, and it is doubtful that another calendar will ever be produced again.

As it turns out, this isn't the first time that 2008 calendar cover boy Michael Biserta posed for the camera.  Last time this second year fireman was shot without his shirt on, he was also missing his pants!  Biserta bared all for the infamous "Guys Gone Wild" video distributed in 2004.  See video below.

In the video below, this sexy hose dragger dropped his pants on "Guys Gone Wild" as he was encouraged by some promsicious ladies off camera.

"You girls are bad influences," Biserta tells the women on the tape.

In the video, the camera follows a buck naked Biserta from the bedroom to the shower of his hotel room as the girls encourage the hottie by bragging about his cute face, muscular physique and well hung anatomy :) Biserta even tells the girls they "better get (his) face" in the video. I bet he regrets that now!

The FDNY was caught off-guard by the DVD, which came to light after the new firefighter calendar was printed and the shirtless firemen appeared on NBC's "Today" show.

Fire Commissioner Nicholas Scoppetta responded to the salacious developments by prohibiting city firefighters from ever posing for the charity calendar, which is published by the FDNY Fire Foundation.

WARNING:  By playing the video below, you agree that you are at least 18 years of age!

Keep reading to see more photos of the would be FDNY 2008 calendar.

this firefighter should do something else with that hose...quit the fdny and strip!

this guy makes me wish my house was on fire!!!!

TrackBack URL for this entry:
http://gaysocialites.blog/magazine-mt/mt-tb.fcgi/1861