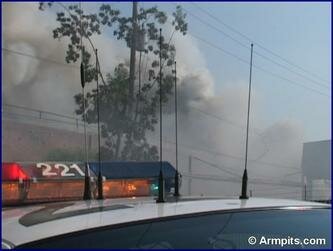 The WeHo gay hot spot, Mickey's, went up in flames on Tuesday as the flamers rolled in for Happy Hour.

Paparazzi and gay D-listers gathered around to watch the building burn to the ground.  CBS2 is reporting that the fire started in a malfunctioning air conditioning unit in the basement that was fueled by liquor meant to stir up thousands of green appletinis.  Even gay fires have drama!

"There were people outside crying, resting their heads on people's shoulders," witnesses said.

I guess it really is upsetting when you had your night set on stuffing dollars down go-go boys thongs.  Life is tough.

Our thoughts and prayers go out to Mickey's in WeHo.

I hope they re-build!

It didn't burn to the ground. Why did you say that - to make the story better?

If they have fire insurnce they should able to rebuild again!

TrackBack URL for this entry:
http://gaysocialites.blog/magazine-mt/mt-tb.fcgi/2038