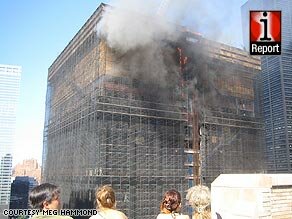 It's known as World Trade Center #5, the Deutsche Bank building and most recently as the toxic tower.  Saturday it went up in flames, evacuating our neighborhood in Lower Manhattan.

The building located near the World Trade Center site in New York City was undergoing demolition from the roof down.  The cause of the fire is unknown, but officials said it was a tough fire to fight due asbestos abatements and more.

“As of now the fire is still not under control,” Bloomberg said during a 9 p.m. press conference. “The cause of the fire will be investigated by fire marshals as soon as firefighters have extinguished the remaining pockets of fire.”

Mayor Michael Bloomberg says the building is not unstable, and despite earlier reports there doesn't seem to be any concern that of that happening.

“We’ve had the Buildings Department in there, they’ve looked at every floor and they are totally satisfied that there is no danger whatsoever. The fire was not that hot. The aluminum decking may melt, but the basic structure of the building, our Buildings Department has said quite explicitly, is secure," Bloomberg explained.

The main concern now seems to be air quality, but Mayor Bloomberg says he isn't too worried about that either.

"Air quality and the environmental impact, as you might imagine, are a top concern to us and we are monitoring the situation very closely. We are very much aware about the Lower Manhattan community’s concern about the possible environmental effect regarding the demolition of this building," the mayor said.

"Right now, our health experts at the Health Department and the Department of Environmental Protection do not see the need for a frozen zone other than in the immediate area for the purpose of conducting fire and emergency operations but we will continue to monitor air quality as the situation develops. …

Today’s events really are another cruel blow to our city and to the Fire Department and specifically to the house that Engine 24, Ladder 5 and Battalion 2 are in. They are just across the street from the Deutsche Bank building and on Sept. 11, 11 people from this house were killed."

The GaySocialites world headquarters wasn't the only building evacuated.  Our building and most of the residents in a few block radius of the Deutsche Bank building were sent to the streets.

TrackBack URL for this entry:
http://gaysocialites.blog/cgi-sys/cgiwrap/cwinters/managed-mt/mt-tb.cgi/2010