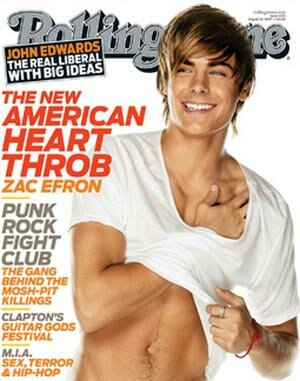 Up-and-coming it-boy Zac Efron graces the cover of Rolling Stone magazine showing some skin and opening up on his rise to super stardom.

On not really singing in High School Musical:
“I didn’t even sing on the first album. It wasn’t my voice in the movie. Even though I wanted to do it. So what do you do when the entire cast is supposed to accept an award at the Billboard Awards and your voice is only on the album in a select few lines. I felt extremely guilty.”

On the “commitment” ring he wears:
“I’m not even going to say who it’s from. This is just a ring from a friend that I got. ‘Commitment’ is way too weird a word for me right now. I’m wearing it for a friend…It is a female friend, but I can’t say who, because then it would be chat-room pandemonium and teenage magazine-hysteria.”

Could she be his fag hag?!

www.ZefronOfficial.piczo.blog
for a zac efron site!
see which rumours about zac are true, and which are false!
You can even e-mail zac!

TrackBack URL for this entry:
http://gaysocialites.blog/magazine-mt/mt-tb.fcgi/1913