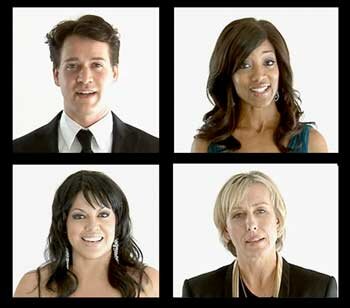 Openly gay actor T.R. Knight, his on-screen wife Sara Ramirez,  star of the Grey's spin off "Private Practice" Kate Walsh and Grey's Anatomy transgender guest star Alexandra Billings are four of the 25 actors who have volunteered to be part of the "Be an ally, be a friend" advertising campaign.

You'll remember that ABC fired Isaiah Washington from the show after he called T.R. Knight a faggot last season.  Needless to say Isaiah won't be a part of this ad campaign.

In the ads released by The Gay & Lesbian Alliance Against Defamation on Tuesday, the celebs talk about the power of language like homophobic slurs and of accepting a gay or lesbian family member.

Alexandra Billings will guest star on the upcoming season of Grey's while Kate Walsh will launch her spin off "Private Practice" this fall.

TrackBack URL for this entry:
http://gaysocialites.blog/cgi-sys/cgiwrap/cwinters/managed-mt/mt-tb.cgi/2171