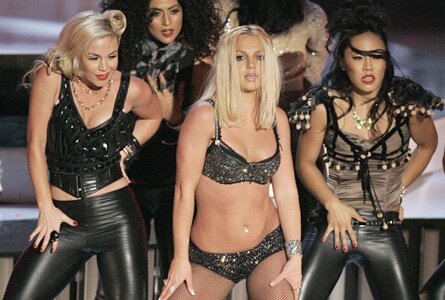 In less than 24 hours after Britney Spears made a complete and total fool of herself attempting a "comeback" at the MTV Video Music Awards, tons of pathetic excuses are popping up as to why Britney totally screwed up a great opportunity.

We were initially told that the Palms pulled the plug on Britney's original act with Criss Angel, because it was too dangerous.  Later we heard it wasn't the Palms who put their foot down, but we were told that it was MTV that put a stop to Britney's magic act.

Now, the spin from Team Britney is that Mama Spears heard what Sarah Silverman was going to say in her opening act calling the Spears-Federline boys "mistakes" and performed horribly in protest.

Perez Hilton says he talked to Silverman's manager who said no one knew what Sarah was going to say that night, so Britney can't use that as her excuse.

“Sarah did nothing but react to Britney’s actions in a comical way, which is what she was asked to do,” Silverman’s publicist told Perez.

Additionally, production sources confirm to PerezHilton.blog that no one knew Sarah’s material before she performed it. “There was no MTV script approval,” says a show insider. “The only person who knew what Sarah was going to say was Sarah. When she rehearse she even said, ‘Joke. Joke. Joke. 50 Cent. Britney Spears. Etc.’ And she only mentioned the names of the people that she was going to talk about. No one ever heard her material before it aired.”

gaysocialites.blog is also being told that while Britney may have burst into tears after her performance, no one from Spears' camp has said a word to Silverman or her peeps in regards to Sarah's stand-up act that followed Britney's lame performance.

So, it looks like Britney's "people" will have to go back to the drawing board to find a whole new excuse for why Spears let all of her fans down by completely blowing her overly hyped comeback performance.

u has crossed the line. u don't know her, so how do u say her career is RIP'd? u don't knows what ur talkin' bout so stop writing. no body like u and nobody ever will.

Haha, right. It's all Sarah Silverman's fault.
Judge for yourselves: harsh or not? Watch the video here.

It was all Sarah's fault... how dare she go up there and do what she has been doing throughout her standup career (lol.)

Sarah's comments were, obviously, from one of the tabloids which wrote "Britney tells her kids they were mistakes." I thought it was funny, but I guess Britney didn't, oh well.

TrackBack URL for this entry:
http://gaysocialites.blog/cgi-sys/cgiwrap/cwinters/managed-mt/mt-tb.cgi/2231