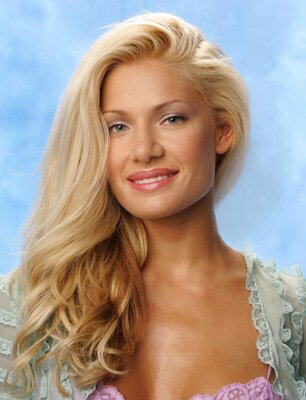 If you watched Big Brother 8 Tuesday night on CBS, then you witness Janelle Pierzina's cameo as she hosted the Power of Veto ceremony.  In addition to reminding us that she holds the PoV record by winning seven in one season, Janelle also got completely insulted by America's Player Eric Stein.

Eric made a joke about a photo of Janelle on a jumbo-TV.  Evidently America's Player thought Janelle looked a little large on the big screen and said the photo must have been taken before "the weight loss."

Now, Janelle is blogging her side of the story on her official fan site.  Yes, she really has her very own fan site.

"People need to give it a rest. I realize Eric has alot of fans, but random strangers calling my mothers business and saying I screwed up the game is ridiculous. I have done no such thing. Let me clarify for the haters exactley what went down.
I was super excited to be able to host a veto competition and was even more excited when I saw the set was pink. Big Brother told me that I would get to meet the houseguests and wasn't allowed to talk about the game or tell anyone I hated them or anything like that. They said have lots of fun with it and have a good time. Before I was reveiled to the houseguests I was hiding behind a screen. There was a short video clip of me winning all the vetos. All the houseguests were excited it was a video of me...except Eric. He said oh Janelle meets miss Piggy oh goodie. Three seconds after that I was signaled to walk in front of them. Even though Eric made that nasty comment pretty much to my face I smiled and greeted everyone. I am a buxom blonde and no one will ever change that no matter how nasty they may be. I heard Jameka say oh oh Eric, and he was shaking like a chihuaha. He was obviously not very comfortable with me being there but I was having a great time. I wasn't going to let anyone ruin the pink veto competition and this very special night. The houseguests went one by one each competing in the morphomatic. I cheered for each and everyone of the. I was really awkward though because it was just me and them behind the screen, with me cheering them on. I said things like. "yeah" "good job" "go" to whoever was competing, and let me tell you I felt like such a nerd! lol I said the same thing for each houseguests and didn't want to play favorites. In between takes I had a little talking with the houseguests. Dick started flirting with me asking if I was engaged. When I told him no I wasn't he goes " oh good so there's hope for me" lol Oh Dick your such a beefcake! Embarassed
After Dani competed she told me your my favorite, and I told her "oh gosh I love you" Which just kind of came out. I talked with Zack briefly about music. he asked if I still listened to Trance and Tiesto. I said of course. They asked me if I knew what saftey meant. I said no I didn't . They asked if I knew any codes. And I told them yes I knew what 153 meant. I saw it on the show last week. After they competed they had to go inside so Big Brother could tallie the results. Before going in Dick asked me if I wanted a cigerette I told him yes I would and asked if he would mind lighting me up. I haven't smoked in awhile but man are his cigs harsh. I prefer something a bit lighter. The houseguests came back outside to see who won. After it was revieled I put the veto on Dani's neck and told her she's well on her way to becoming the next veto queen. I hugged each and everyone of them and told them good luck in the game. Everyone! When I hugged Dick I told him he was hot and smelled nice. lol
Honestley Eric is the only houseguest that didn't try to talk to me. hmmmmmm. For everyone out there that says I went in there to trash Eric SCREW YOU. I was so damn nice to him even though he had said I was Obese and Miss Piggy. Mind you I heard this and was hiding but in ear shot. Perhaps the houseguests read into things too much. But what everyone is not realizing is that Eric was the one giving me the cold shoulder. I was cheering him on! So maybe that's why they think I "hate" Eric. They know that I heard what he said. How could I not? Anyway sorry to ramble but I wanted to share this fun experience with you all. I'm not going to let a bunch of bitter Eric fans ruin my parade. I didn't do s**t to Eric's game. He has made bad descisions in the game so don't blame me for his mistakes. I know you want someone to blame for Eric's shitty week, but please leave me out of it. I was a wonderful veto host and treated everyone fairly."

Do I need fans to start my own fan site?

I watched the POV and I have to agree , you was a wonderfull host and did not treat anyone bad , I thought you would say something harsh to Eric but you didn't . Hope to see you again on BB8

OMIGOD-- I cannot believe you are getting so much grief, lol. It has to be sort of funny, but I mean crazy funny. People taking times out of their "lives" to bash you. I have to admit, I like Eric, and I didn't feel you showed any ill will towards him. He was an ass, but you conducted yourself with the grace which has always been a part of you. Awesome Job!!!

Hell with Eric, he was rude, you are so pretty, he wishes! LOL He probably just said that because he didn't want Jess to get jealous, haha. I think were really nice to him and definetly the bigger person!

Huge fan, what a doll. You have a great personality & luv watching you. Hope to meet you some day. Wish you all the good things in life.
Joey Sinisi

Janelle,
You rock girl! Eric is the PIG! I think he talks just to hear himself talk. I was so excited that you were on the show the other night, and you did a great job!

TrackBack URL for this entry:
http://gaysocialites.blog/cgi-sys/cgiwrap/cwinters/managed-mt/mt-tb.cgi/2172