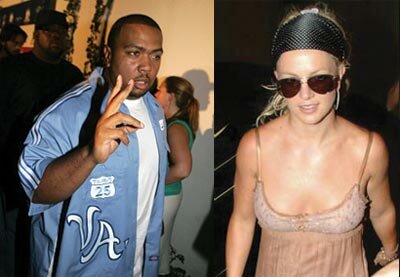 So evidently there WAS some truth in the rumors that Britney Spears was collaborating with Justin Timberlake and Timbaland on a new track.  Surprise, surprise.... but Britney blew it!

Music producer Timbaland says there was some talk about a duet between Britney and her ex-boyfriend Justin, but it doesn't look like there is any chance of that happening now.

Timbaland says a Britney-Justin duet would have been "the best thing that ever happened" and would "help her out a whole lot."

The music mogul also has some advice for Britney's "comeback."

"She needs a story," he said. "She has no comeback story. That's the problem. She has to have a team. She needs to come back with Justin doing records; [then we'd see headlines like,] 'She went back to her ex and she's making smashes.' [But instead she got] so big-headed and [was] like, 'Screw you, screw you, I don't need nobody.' "

With all of the partying Brit-Brit is doing, you'd think she would at least have a story!

Meanwhile, Timbaland wants Spears to apologize.  I wouldn't count on it!!

She needs to grow up. When she loses the body, she'll be begging for any gig.....

Could Britney Spears have saved her career had she performed together with Justin Timberlake? ---------> http://www.youpolls.blog/details.asp?pid=480

TrackBack URL for this entry:
http://gaysocialites.blog/cgi-sys/cgiwrap/cwinters/managed-mt/mt-tb.cgi/2256