Britney Spears is out of hiding 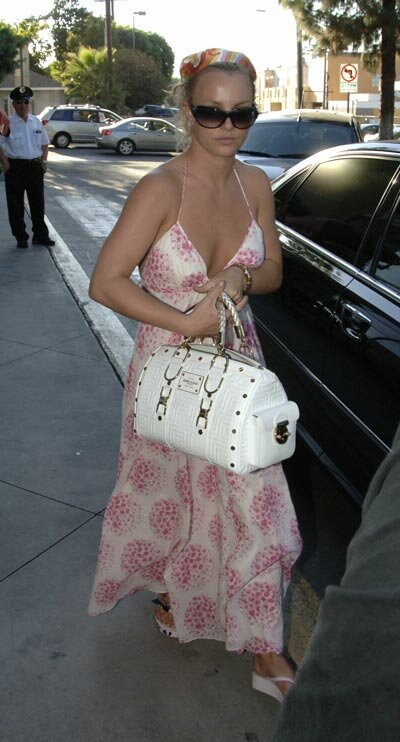 After Britney Spears ruined any chance she had a comeback by totally bombing at the MTV Video Music Awards on Sunday, the former pop superstar went into hiding.

Now, Brit-Brit has resurfaced.  The New York Post caught Spears attending some meetings with lawyers, shopping and taking care of personal biz.  All on Jayden James' birthday. It must REALLY suck to be Britney's kid!

Should we expect a new panty-less shot soon?

September 13, 2007 -- Britney Spears emerged for the first time since her disastrous career "comeback" ... to spend four hours with her attorney.

The troubled pop-tard has been in hiding since her awful MTV Video Music Awards performance, which made her everyone's object of ridicule.

According to U.S. reports, Britney not only met with her lawyer, but also with ex-husband Kevin Federline about the bitter custody battle over their sons. The date happened to fall on her youngest son Jayden's birthay.

Insiders say her agreement gives her Jayden in the morning and Kevin gets him for the rest of his birthday.

Once she left her attorney's office Brit -- wearing an ankle-length floral summer dress with a trendy white Versace handbag and Versace sunglasses -- went shopping at Ralph's cheap supermarket chain With her assistant, Ali.

TrackBack URL for this entry:
http://gaysocialites.blog/cgi-sys/cgiwrap/cwinters/managed-mt/mt-tb.cgi/2254