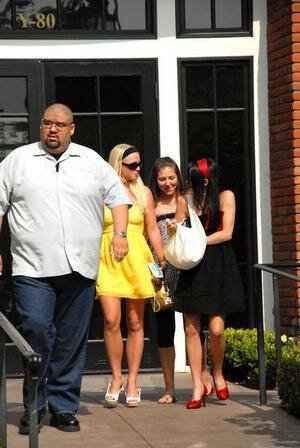 Britney Spears' former bodyguard Tony Barretto recently testified against the former pop princess in court saying, ""I've been concerned about her erratic behaviour from day one."

Now, Tony is telling the rest of the stories (juicy details and all) to the News of the World.

Here are some highlights:

"She has mental problems, and they are not helped by her taking drugs and alcohol.

"Her children need attention, and Britney doesn't appear to be willing to give them that at the moment.

"She can't cope with being a mother, as she has such a low boredom threshold.

"With her drug and booze issues, her home is no place for children to be raised.

"Whenever she drinks, she turns into a party animal."

"Once she made me take a Jack and Coke to her as she sat in her white Mercedes – and then she sped off with it. In the US, that's illegal.

"In the end, whenever she'd ask us to fix her a drink, we'd trick her by filling the cups with coke and adding a dash of bourbon on top to make it seem stronger than it actually was.

"All of a sudden, we weren't bodyguards anymore. We'd turned into babysitters!

"We had to cut back on her booze because it was easier for us.

"We were desperately concerned about her mental and physical welfare. She was acting very nervously and biting her acrylic nails down to the base.

"She was deeply upset and appeared distraught, with tears in her eyes. I've never seen her so bad.

"While all this was going on she could only say: ‘I don't feel good' .

Barrett also says he never saw Britney and Kevin Federline together.  He also claims he saw her use drugs in front of the kids.

She needs help.  We should start a "Save Britney" campaign, not a "Leave Britney Alone" campaign.

Can you say Anna Nicole Smith?!

the ANS remark was funny, lol.

Yeah it was funny lol!

TrackBack URL for this entry:
http://gaysocialites.blog/cgi-sys/cgiwrap/cwinters/managed-mt/mt-tb.cgi/2361