Celebrities party in Vegas for VMAs 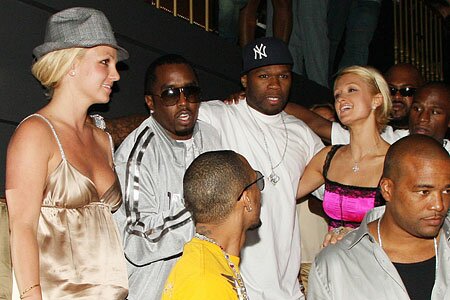 The MTV Video Music Awards have ascended on Las Vegas this weekend, and the stars have taken the Sin City scandal to a whole new level!

Britney Spears seems to be leading the pack teaching her fellow celebutantes how to really party!Even celebs bragged about Britney sightings, buzzed about what events she would attend and offered opinions on her chances for a comeback.

Swag bags are flying left and right as Spears and other celebs are stocking up on freebies.  We're talking everything from diamonds and designer jeans to over priced sun glasses and free hotel rooms.  Like the celebs need any of that free shit.

After the designer tents closed, the parties really began.  In addition bragged sightings of Britney's drunken ass, the stars are coming out to partay!

Christina Aguilera was spotted at nightclub LAX, Pharrell Williams sponsored a feast at the Venetian and Maroon 5 and Robin Thicke performed at the House of Blues. Maxim's bash at Mandalay Bay, which featured an hour long set by Joss Stone, drew rapper Chamillionaire and "Entourage" stars Adrian Grenier and Kevin Connolly.

The Hard Rock Hotel was packed to capacity hosting concerts by Kanye West, 50 Cent and Linkin Park. Paris Hilton, Ciara and Mario Lopez took in Fiddy's poolside show.  Spears and Diddy also dropped by his after party before leaving together for nightclub Tao.

Sunday night's show will open with a performance by Britney Spears and includes appearances by Madonna, Kanye West, 50 cent and more.

What you won't see:  British songbirds Amy Winehouse and Lily Allen.  Lily is basically banned from the US and Amy is probably too fucked up to travel.

TrackBack URL for this entry:
http://gaysocialites.blog/cgi-sys/cgiwrap/cwinters/managed-mt/mt-tb.cgi/2215