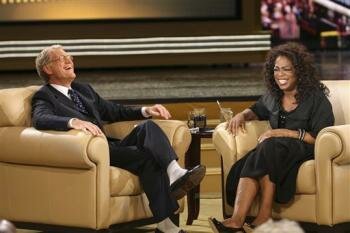 David Letterman appeared on the season opener of the Oprah Winfrey Show Monday as the Almighty O broadcast her show from New York City.

Letterman who Oprah calls "interview-phobic" spoke candidly about life as the father of his 3-year-old Harry.

Oprah didn't rag Letterman as much as other interviewers seem to about why he hasn't married his girlfriend and baby-mama Regina Lasko.

Dave and Oprah also joked about their public tour addressing that Letterman hoped Winfrey would invite him to her show all while joking on the air that she still hadn't called.

The talk show moguls made up when Winfrey appeared on Letterman's CBS show. It was her first guest appearance with Letterman, though she twice appeared on his NBC show switched networks in 1993.

Dave and Oprah were hilarious together. They should go host a show together every day.

TrackBack URL for this entry:
http://gaysocialites.blog/magazine-mt/mt-tb.fcgi/2229