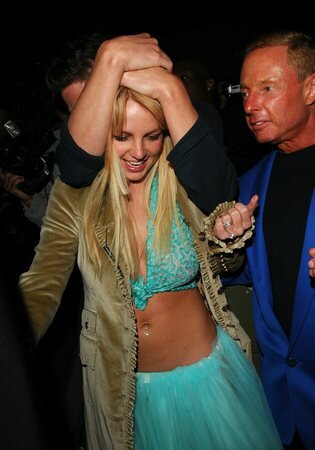 Even though a judge has ordered Britney Spears to take random drug and alcohol tests in order to keep joint custody of her kids, Spears continues to hit the town.

Los Angeles has one hell of a party scene, and Britney is not going to miss out on it!

PEOPLE magazine caught Britney partying on Tuesday night at Hyde.  Spywitnesses say Spears is still drinking despite the judge's orders.  Britney's ex, Kevin Federline, is seeking more custody rights; and a judge has ordered Britney to take random drug and alcohol tests so the court can monitor her behavior.

"They kept bringing (Spears) shots and so they were drinking," says a Hyde observer. "She was dancing on the tables trying to be really sexy, even putting a black sock over her head as a hat, and putting on a show for everyone."

Earlier in the evening, Britney went to the Los Angeles Police Department to complain that a group of photographers were following her; but evidently nothing was done.

I guess she didn't want anyone to catch her wild night on film.  I'm starting to wonder if Britney really wants custody of the kids at all.

TrackBack URL for this entry:
http://gaysocialites.blog/cgi-sys/cgiwrap/cwinters/managed-mt/mt-tb.cgi/2332