« Big Brother 8: Are you willing to pay to chill with Mike Dutz? | Main | Were the Mr. Black arrests warranted? » 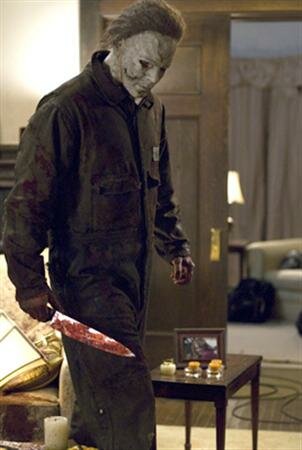 Rob Zombie's reinvention of the 1978 horror film, Halloween, spooked the competition this weekend at the box office setting a new record for a weekend opening.

The movie made an estimated $26.5 million in U.S. and Canadian ticket sales through Sunday evening.

LOS ANGELES (Reuters) - A re-imagining of the classic slasher movie "Halloween" broke the record for a new release during the U.S. Labor Day holiday weekend, according to studio estimates issued on Sunday.

The movie, directed by rock star-turned-filmmaker Rob Zombie, earned about $26.5 million since opening on Friday, easily beating the rosiest predictions.

After two weekends at No. 1, the teen comedy "Superbad" slipped to No. 2 with $12.2 million for the three-day period.

Two other films debuted in the top 10. The martial arts movie parody "Balls of Fury" came in at No. 3 with a modest $11.6 million, while the Kevin Bacon vigilante thriller "Death Sentence" barely registered a pulse at No. 8 with $4.2 million. Their respective studios said the results were in line with expectations.

"Halloween" distributor Metro-Goldwyn-Mayer expects its film will hit $30 million when sales for the Monday holiday are included. Observers had expected it to make $20 million for the four-day period. Final data will be released on Tuesday.

The three-day sum smashes the $16.5 million Labor Day opening record set two years ago by "Transporter 2," which added $3.6 million on Monday. The all-time record for the four-day period is $29.3 million set by 1999's "The Sixth Sense" in its fifth weekend.

"Halloween," the eighth film to be spun off from John Carpenter's 1978 original, focuses on the grim childhood of its villain, Michael Myers. It cost about $15 million to make, said Bob Weinstein, co-founder of the film's closely held producer, the Weinstein Co.

Despite its success, the former Miramax Films chief doubted there would be another "Halloween" film.

"I never say never never ... but it would have to be something very, very different," he told Reuters.

The studio does plan to make two more movies with Zombie, whose real name is Rob Cummings. Zombie, 42, rose to fame in the 1990s at the helm of the heavy metal band White Zombie. He made his feature directing debut with 2003's "House of 1000 Corpses."

After three weekends, "Superbad" has earned $89 million, and the film will easily pass the $100 million mark, said Columbia Pictures, a unit of Sony Corp.

TrackBack URL for this entry:
http://gaysocialites.blog/cgi-sys/cgiwrap/cwinters/managed-mt/mt-tb.cgi/2161