« Portia De Rossi before her dress got stepped on at the Emmys | Main | Britney's day in court, meet the 'secret' witness » 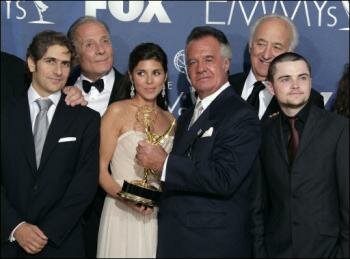 Sunday night's 59th Annual Emmy Awards changed things up this year with a young, trendy host and a contemporary round stage.

The celebs of course showed up dressed from head to toe in trash and glamour while Ryan Seacrest proved to the world that he is this generation's host.

But... who cares about the frills.  If you cared that much, you would have watched it...right?

Here's a complete list of the 2007 Emmy Award winners:

Writing, Drama Series: “The Sopranos: Made in America,” HBO.

While I feel like Ugly Betty got robbed for Best Comedy Series, I am really proud of Tina Fey for 30 Rock!

TrackBack URL for this entry:
http://gaysocialites.blog/magazine-mt/mt-tb.fcgi/2293