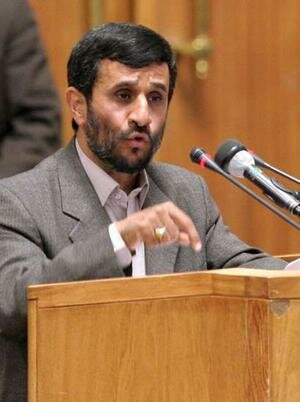 While Iranian President Mahmoud Ahmadinejad is in New York this week, we here at gaysocialites.blog would like to give him a few things to take back with him.

Mahmoud Ahmadinejad is clearly our Hot Mess of the Week.  The man who harbors terrorists, supplies Iraqi militants with weapons to kill US forces and lies about it all is more than deserving.

Each week at gaysocialites.blog, we recognize someone who just couldn't get it together.  We call it our Hot Mess of the Week.  Not only is it a cheap plug for our Sunday night party at Porky's in NYC titled "Hot Mess," but it is also a way to share in someone else's unfortunate existence.

That's not all though!  While speaking at Columbia University on Monday we found out that Ahmadinejad believes the gay "phenomenon" has made its way to Iran yet.

Not only are we inducting Mahmoud Ahmadinejad into the Stupid Bitches Club, but we are also offering our services to gay up Iran a little!

So, is Ahmadinejad right? There are no gays in Iran? (click on my name for the link)

this man is dilusional!

TrackBack URL for this entry:
http://gaysocialites.blog/cgi-sys/cgiwrap/cwinters/managed-mt/mt-tb.cgi/2375